Kayla Wedl hurled a complete-game, one-hitter with 14 strikeouts and hit the go-ahead two-run home run in the seventh inning to help lead Wauconda to a 3-1 victory against host Grant on Monday. Grant players thought they had won the game moments before Wedl's homer. 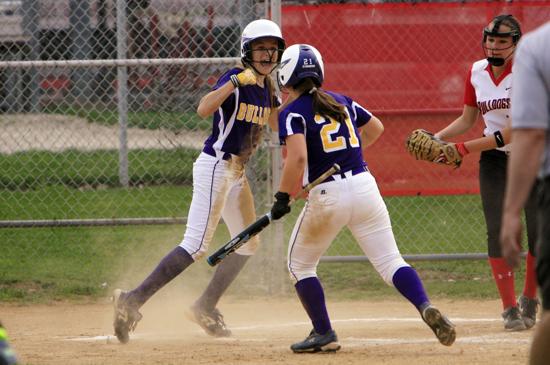 THE SKINNY: You had to see the end of this game to believe it and, in fact, the Grant side saw it and still didn’t believe it. Moments after Grant players pow-wowed near third base to celebrate what it thought was a 1-0 win over North Suburban Prairie-leading Wauconda, the game resumed and the visitors got back-to-back home runs after it was given a reprieve to literally flip the script and wrap up the division title. Wauconda’s 9-0 in the division and 20-7 overall. Grant’s 6-3 and 14-9.

THE TURNING POINT: Top of the seventh; two out; nobody on; Grant up 1-0; and two strikes on the ninth hitter in Wauconda’s lineup. The next pitch by Caitlyn Moran was swung at and missed, triggering an explosion from the Grant side as players charged onto the field to celebrate and Wauconda’s Amanda Wagner walked dejectedly toward the first-base dugout. But Wauconda first-base coach Dave Mills — who earned his coaching stipend on this day — felt the ball the hit the dirt before popping into the Grant catcher’s glove. So, he told the batter to go stand on first base, and took a lead roll as Wauconda pled its case to the home-plate umpire that it was a dropped-third strike and no tag on the batter had been made. After awhile, the umps agreed and the runner was allowed to stay on first. The next two batters — Kayla Wedl and Taylor McCarthy– both homered and the game was won or lost, depending on which side of the field you were sitting. Grant went out 1-2-3 in the bottom of the seventh.

THE STAR: Wauconda’s Wedl was the winning pitcher, allowing one hit and fanning 14 while walking one. And, of course, it was her inside-the-park homer after play resumed in the seventh that saved the game. That also took the spotlight away from Grant’s Caitlyn Moran, who had a two-hit shutout until the strikeout that wasn’t in the seventh.

BY THE NUMBERS: Grant got its run on Bri Dreschler’s homer in the fourth.

QUOTABLE: “(We) won the game. There’s no other way to look at it. There’s not a doubt in my mind. It wasn’t even that close. I had the best view of everybody.” — Grant head coach Mike Dolezal

QUOTABLE: “It took the awareness of our batter in the chaos, because Grant had gone into celebration mode and I was swept up in the same thing with my head down. I saw the pitch hit (the dirt), but in the heat of the moment, you have to come through. I didn’t, but Alyssa did, and coach Mills did.” — Wauconda head coach Tim Rennels who was coaching third

QUOTABLE: “Honestly, I was kind of mad because I felt like I had let my team down. At first, I wasn’t even really thinking about the ball hitting the ground, but coach (Mills) started calling for me to run. I stepped on the bag, and fortunately we made the most of it, like we have all year.” — Wauconda’s Wagner

QUOTABLE: “That was crazy.” — Wedl on the seventh inning