Mount Carmel assistant coach Curt Ehrenstrom died on Monday after a battle with pancreatic cancer. Despite never having played football, Ehrenstrom was offered a spot on the staff by coach Frank Lenti because of his "ability to relate to students.'' 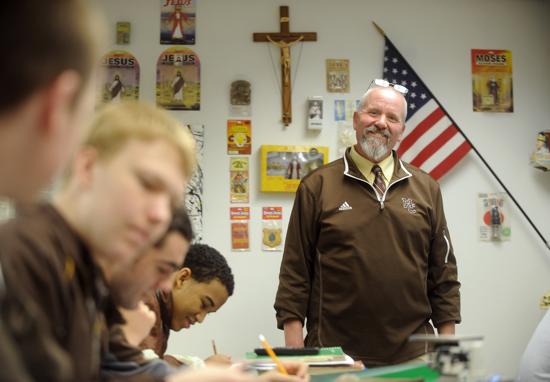 When Curt Ehrenstrom was doing his student teaching under Frank Lenti at Mount Carmel, the Caravan football coach saw someone who could help the program.

The next year, Ehrenstrom joined the Mount Carmel faculty as a physics teacher and Lenti asked him to become a member of his staff.

“He said, ‘I’ve never played or coached football,’” Lenti said Tuesday. “I said, ‘We’ll teach you everything you need to know.’”

That was good enough for Ehrenstrom, who joined the Caravan football staff and remained on it — except for a break when his kids were younger — until he died on Monday after a battle with pancreatic cancer.

Ehrenstrom, who turned 53 on Sunday, is survived by his wife, Shellie, and four children: Jon, Charlotte, Zac and Luke.

Lenti, the state’s all-time winningest coach, wanted Ehrenstrom on his staff, despite his lack of football experience. He saw not someone new to the sport, but someone who could connect with teenagers.

Ehrenstrom’s stengths, according to Lenti: “His ability to relate to students, his grasp of his subject matter. He made learning fun.”

Lenti isn’t the only one who thought so. Last May, Ehrenstrom was one of 10 Illinois recipients of the Golden Apple Award for Excellence in Teaching.

On the football field, Ehrenstrom spent most of his time working with the Caravan’s younger players.

“He was a very strict disciplinarian,” Lenti said. “He always felt, as the head sophomore coach, his No. 1 job was to get kids ready to play varsity football.”

Mount Carmel had planned to honor Ehrenstrom at its alumni banquet, but he wasn’t able to attend because of his failing health. Still, Ehrenstrom never lost his sense of humor in spite of his medical problems.

A former coaching buddy, Dan Fogelson, was in town for the banquet and, along with Lenti, decided to visit Ehrenstrom.

“You know, if you accidentally happen to get some doughnuts on the way ...” Ehrenstrom texted Lenti. “I have permission to be rude and ask for stuff from people. It’s one of the perks.”

“Just an exceptional person,” said Lenti, who has made arrangements to have “CE” emblems added to Caravan football helmets for the 2014 season in honor of the longtime coach.

Mount Carmel also has marked the passing of others associated with the program in the past. “Normally, we just do that on the varsity helmets,” Lenti said.

But to mark the legacy of a guy who spent his coaching career working with younger players, these stickers will go on every Caravan helmet: varsity, sophomore and freshman.

Not a bad testament to a guy who never played football.