As her career winds down, Lemont's Kim Jerantowski has 78 goals and 49 assists. With two state trophies (neither a title) in tow, the senior forward is set on going out on top. 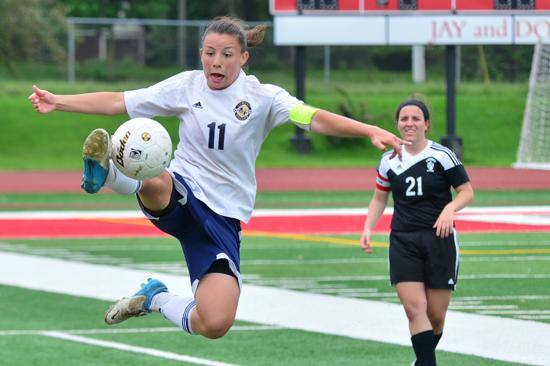 From the time she was little, Kim Jerantowski had a curious and competitive nature. She also had a bit of a rebellious streak.

“When I was younger, my parents signed me up for everything just to see what I liked,” she said. “My mom signed me up for gymnastics and I absolutely hated it. She said we’d try a team sport — that was soccer. So I started when I was about four.”

The sport stuck, becoming the object of her affection.

As her career closes, the Lemont senior forward has 78 career goals and 49 assists. She made her reputation right from the start, scoring 19 goals as a freshman to lead the Indians to 23-wins and third place in the Class 2A state tournament.

She scored both goals in Lemont’s 2-0 victory over Wheaton Academy in the third-place game.

Last year, she scored 20 goals and added 17 assists for a 21-win team that finished fourth in Class 2A.

“Kim is a very complete player,” Lemont coach Rick Prangen said. “Her greatest attribute is her composure with the ball and creativity. She is fearless in one-on-one situations.”

This season, the Northwestern recruit has 19 goals and three assists. With each year she has diversified and refined her game.

“I think I’ve improved tremendously, especially agility wise,” she said. “I never used my left foot before I got to Lemont, and now I’ve gotten much better with my left foot.”

Jerantowski has also embraced the role of team leader and role model, the player for whom younger athletes study and look to for guidance. That relationship has been crucial, with Jerantowski providing encouragement for the younger players to develop.

“As I’ve gotten older, I grew as a person and a player,” she said.

Jerantowski is also a versatile athlete. She was a three-year starting point guard for the Indians’ basketball team and averaged 10 points, three steals and two assists this season. Rather than detract from her soccer skills, basketball only helped sharpen her athletic ability.

“It helped me a lot, especially adapting to the pressure of playing varsity,’’ she said. ‘‘It helped me be a leader. With basketball, I was better at defense, so I had to move my feet a lot and anticipate as well.’’

Jerantowski signed with Northwestern because of its status as an elite academic school, its proximity to her home and the opportunity to play in the charged atmosphere of the Big Ten. Now She is pursuing the ultimate, a state title.

The Indians are the No. 1 seed in the Class 2A Lincoln-Way West Sectional. Lemont won state trophies Jerantowski’s freshman and junior years.

“After freshman year, I talked with [keeper] Kelly Fritz, the other captain, and we said in a year or two we want to go even further, but unfortunately we weren’t able,” she said. “Now we want to win the whole thing. We talk about it all the time in practice, and every day we want to make sure that we play hard.

“That is definitely our motivation.”