Tony Baranek breaks down recent developments in Southland softball action, including a look at the astonishing comeback of Providence senior Courtney Pych. 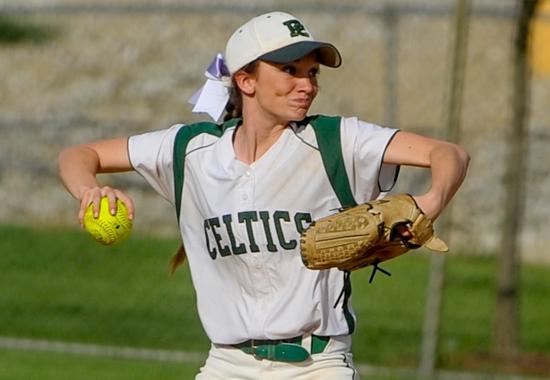 Courtney Pych doesn’t think about the pain she still occasionally feels in her right leg when she’s playing softball for Providence.

The senior shortstop has been nothing but sharp for the Celtics in 2014, batting .393 with six doubles, five home runs, 22 runs and 15 RBI.

Pych was playing outfield for her summer league team, the New Lenox Lightning, at a tournament in Indianapolis when she collided with a teammate while chasing down a fly ball.

The impact caused Pych’s right leg to snap in a manner similar to that of Louisville basketball player Kevin Ware, who suffered a gruesome injury in an NCAA Tournament Elite Eight game against Duke in 2013.

Her first reaction? It wasn’t to cry.

“I don’t actually remember doing this, but there were people in the crowd watching who have told me that my first instinct after it happened was to get up and play the ball,” she said. “So I guess I attempted to try.”

Pych was taken by ambulance to a local hospital, where she had surgery an hour later. To repair her leg, doctors inserted a metal rod. In the months to come, she worked with therapist David Brightmore to achieve her goal of getting back on the field for her senior season at Providence.

“He was a big motivator and never gave up on me,” Pych said. “I never had any thoughts that I would not continue to play. I think since the accident, this whole setback, I’ve actually been able to re-fall in love with the game.”

One of Pych’s biggest games of the season came against Marist, when her three-run home run was the difference in a 4-2 Celtics win. In the rematch the following day she was 3-for-4 with another home run.

“I have this reason to go out there and prove to myself and to everyone that it’s totally possible to bounce back after something almost tragic has happened,” she said. “If you want something bad enough you can go out there and fight for it and do it for yourself.”

Lemont’s Maddy Vermejan has emerged as one of the Southland’s top sluggers. The sophomore second baseman has eight home runs to go along with 36 RBI and a .541 average.

“She is a hard-working young lady that knows the amount of time and effort needed to become a successful player,” Lemont coach Christine Traina said. “As a freshman we brought Maddy up because we saw the potential she had not only as an offensive player but as a strong defensive player for our team.

“She has really made huge strides this season and is undoubtedly a big part of our offensive game.”

Allison Spence, of Marian Catholic, is the SouthtownStar Softball Player of the Week.

Spence, a junior pitcher/infielder, struck out 12 en route to a perfect game against Joliet Catholic. For the week, she was 7-for-15 with three home runs, seven runs and six RBI.