Simeon's Jamary McKinney not only drove in the game's first two runs, he pitched the Wolverines to a 13-3 complete-game win over neighborhood rival Morgan Park on Wednesday at the Kroc Center. 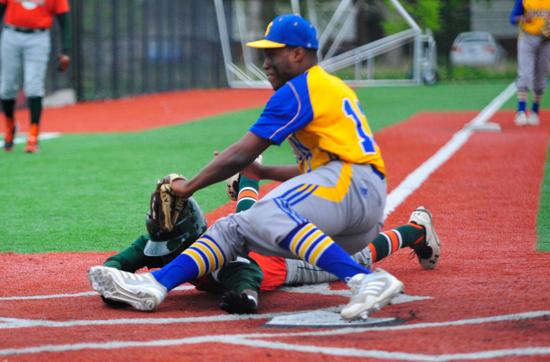 Morgan Park coach Ernest Radcliffe was none too pleased with his team's performance Wednesday against Simeon.

He had every right to be upset.

The Mustangs spotted the Wolverines an 8-0 lead heading into the bottom of the second and found themselves on the wrong end of a 13-3 loss in five innings at the Kroc Center.

"Totally unacceptable," Radcliffe said. "I don't understand it. This is not Morgan Park baseball. It's not what we teach."

It was a pivotal game in the Jackie Robinson South standings. The victory improved Simeon to 10-3 in conference and dropped Morgan Park to 8-4.

Jamary McKinney was a major presence for the Wolverines. Not only did he drive in the first two runs of the game with a bases-loaded single, he recorded the complete-game win on the mound. The big right-hander allowed three hits, walked seven and struck out three.

"The big dog had a tremendous game on the mound," Franklin said of McKinney. "He had a big game for us all-around."

With his curveball ineffective, McKinney relied primarily on a fastball and changeup.

"I threw maybe three curveballs all game; it wasn't working," McKinney said. "They couldn't hit my fastball and changeup, so I kept throwing them."

"We take playing them too personal," Radcliffe said. "We want to beat them so bad. We get too tight."

Darius Hill had two of Morgan Park's three hits on the day, including an RBI. Joshua Shaw had the other hit, an RBI single in the second.

"The Battle of Vincennes," McKinney said. "We've been playing with a lot of those guys growing up. It feels good to beat them."