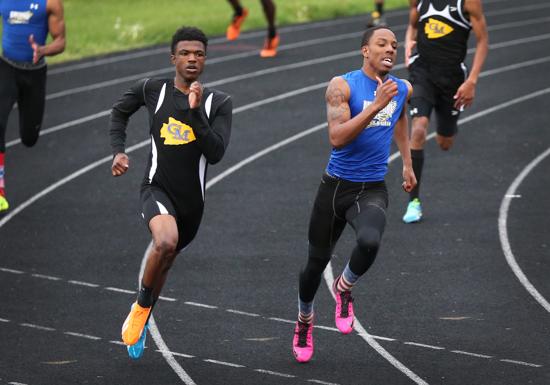 Bloom's James Harriel (right) pulls ahead of Crete-Monee's Quinten Nash as they come off the final turn of the 400. | Allen Cunningham/For Sun-Times Media

The way Crete-Monee coach Brian O’Donnell saw it, defending champion Bloom was the favorite going into the Southland Conference meet.

“On paper, we were supposed to lose by 50 points,’’ O’Donnell said.

That’s not the way it turned out Wednesday night on a wet track at Bloom.

When it was announced that Crete-Monee had won the meet by scoring 170 points to 160 for runner-up Bloom, the Warriors shouted in celebration on the infield.

“All around, we had a good team effort,’’ sprinter Quinten Nash said. “Starting with the individual races all the way to the relays.’’

“I had to just go out there and give my all because if I want to do that double at state, it’s going to be this competitive,’’ Nash said.

“He is going to be very missed next year,’’ O’Donnell said. “He’s a great competitor and he had a great day.’’

“I knew the weather could be kind of an X factor,’’ O’Donnell said. “I think it did play a little bit of a role. Some of our guys stepped up and didn’t let it bother them.

“We had some really good performances, very proud of them. I wasn’t expecting to win conference. Bloom’s a very good team.’’

Bloom standouts Harriel, Jonah Wiley and Daylen Hubbard competed on their track for the final time in their high school careers.

“It’s sentimental because for years we’ve been running and winning,’’ Harriel said. “Ever since I was a freshman, we always won this.’’