Meet the Jackson sisters, the new ‘Venus and Serena of golf’

Golf prodigies Eric and Myah Jackson will compete on the Jones-Payton boys co-op team next fall. 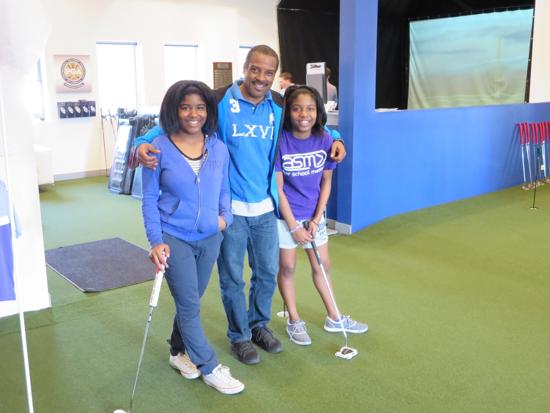 Myah (left) and Erica Jackson (with their dad, Eric) can drive more than 200 yards and are tournament-experienced. | For Sun-Times

Erica and Myah Jackson were 6 and 4, respectively, when they first took up golf. It was love at first swing.

‘‘It was easy, because they started so young,’’ said their father, Eric, a South Side general contractor. ‘‘We started with 15-minute professional lessons. If they did well, they got to choose where we went for lunch.’’

The girls have been honing their considerable golf skills ever since. They have done so well that the family’s Bronzeville home is filled with hundreds of junior golf trophies.

Chronicles of ‘‘The Birdie Sisters’’ have made them an Internet video sensation. Some observers even expect them to become the Venus and Serena Williams of golf.

Even though he wasn’t — and isn’t — a golfer, their father, who played wide receiver at Michigan State in the ’80s, thought golf would be a good choice for his daughters. It was a sport that emphasized skill rather than muscle, and the possibility of a college scholarship was always on everyone’s mind.

‘‘It’s more of a goal than a dream,’’ Erica said, noting how much effort and dedication she and her sister have put into their games.

Considering that both girls are excellent students, they’re a lock to have plenty of college golf options.

Whether they’ll reach the lofty ‘‘Venus and Serena of golf’’ perch remains to be seen. What’s already clear is that the sky’s the limit for Erica, 15, a sophomore at Jones , and Myah, 13, who will join her sister at Jones in the fall.

They’re expected to be dominant in the fall on the Payton-Jones co-op boys team.

Playing last fall on the boys team — Jones doesn’t have a girls golf team — Erica finished third in the boys’ city championship and seventh in the state in the girls’ tournament.

‘‘Who knows if she’s going to make it at the LPGA level?’’ Payton-Jones coach Tom Smith said. ‘‘But there’s no question she’s going to play Division I college golf. It’s a once-in-a-generation opportunity to see girls of this caliber come along in the city of Chicago. These girls are definitely something special.’’

When the Birdie Sisters were still in grade school, they recorded a 1-2 finish in a 132-player field in the Illinois Elementary School Association tournament. They were the only black players entered.

They’re planning to play in more than 25 tournaments this season — at least 20 nearby events and about six out-of-state, including their fifth appearance at the Callaway Junior World Championships in July at Torrey Pines in San Diego.

The girls have generally finished in the middle of the pack at the World Juniors, an event won by future stars Tiger Woods, Phil Mickelson, Amy Alcott and Lorena Ochoa. Myah finished second two years ago at Doral, the sisters’ best showing in an international event.

The tournament circuit is a big financial undertaking, but Jackson and his wife, Marsha Ross-Jackson, an attorney who’s an associate dean at Kent Law School, have been aided by donations and fundraising events.

Myah also figures to add distance this summer after being fitted properly for clubs at Catalyst Golf Performance, the North Side training facility that is also coaching the Birdie Sisters.

‘‘Now I’m hitting it a consistent 215,’’ Erica said. ‘‘When I came to Catalyst, they said my driver was completely wrong for me. Too light. I’m pretty sure the yardage will come. The club speed is there.’’

Mike Napoleon, the Catalyst pro working with the Jacksons, was impressed from the moment he first saw them last fall. Their Catalyst regimen includes fitness training and a nutrition program as well as swinging and putting.

‘‘They’re amazing athletes,’’ Napoleon said. ‘‘They just need refinement to compete against kids that have grown up at country clubs. If they can refine their golf skills, they can be as good as they want to be. They both will probably shoot under-par rounds this year. If they progress, they’d be crazy not to at least give [the LPGA tour] a shot.’’