Barrington senior Nick Relias was going through a normal boys gymnastics practice routine in midseason when he felt a pain in his left shoulder. 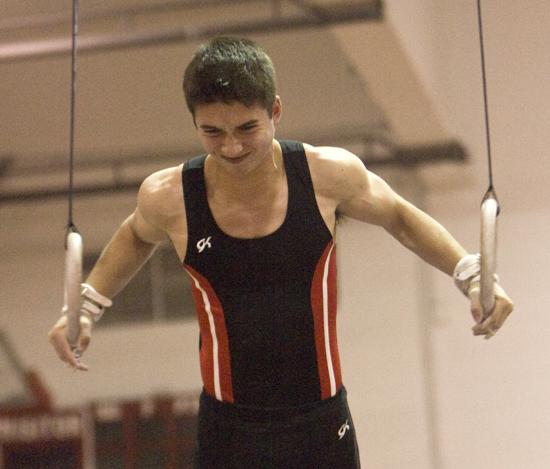 MUNDELEIN — Barrington senior Nick Relias was going through a normal boys gymnastics practice routine in midseason when he felt a pain in his left shoulder.

“All of a sudden it kept bothering me and got worse and worse,” Relias said. “I went to the trainer and they were like, ‘You have tendinitis.’”

The only cure was rest, but Relias wasn’t about to sit out the gymnastics season.

“I just iced and pushed through the pain,” he said.

Despite his effort, Relias struggled in his favorite event, the still rings.

“You work your back, your chest, but it’s shoulders mainly,” he said. “It hurt all the time.”

But Relias did not miss a meet, performing well in duals and in Barrington’s home invitational in April. At the MSL meet on May 2, Relias was competing in the floor exercise.

“I was flipping and over-rotated the flip and shot backwards,” he said.

A trainer gave him the news: His left knee was hyperextended. Another setback.

Relias’ 2014 season could have ended there. But he never considered calling it a career. Just as he did after his shoulder injury, Relias pushed through the pain, practicing for the Mundelein Sectional on Saturday.

In his first event, the floor exercise, his knee went out after attempting to land a flip. The pain became too fierce for him to finish his still rings routine. The vault was his final event.

According to Barrington assistant Jason Pike, the vault requires exceptional speed. Once a gymnast’s arms make contact with the apparatus, he must be able to power his body up into the air.

“It’s how hard you hit the vault. It’s hard to slow down your run or slow yourself down in the air, but you have to push up,” Pike said. “You should always see someone pop over, then hit [the landing].”

Relias was the last Bronco to compete on the vault. He made a good run, popping up into the air after contact. But his landing wasn’t clean.

“He popped up but he had a lot of rotation and it’s hard to stop that rotation,” Pike said.

His score of 8.65 was good for an 11th-place tie with Fremd sophomore Cole Patton. It was below the cut line for an automatic berth to state, but there was an outside chance Relias would qualify with an at-large bid.

He was sitting in his fifth-period environmental science class Monday when he received a text message from junior teammate Parker Larson.

The minimum at-large score was 8.70. Relias’ gymnastics career was over. So was Barrington’s season, as no Broncos qualified for state.

It would be easy to assume Relias would be devastated by the news, but he quickly shifted focus, pivoting away from what he was losing to what he was gaining.

“I was disappointed, but it was bittersweet,” Relias said. “Prom is Saturday night. Now I can go.”