Lincoln-Way Co-op's Caleb Hong is the only Southland gymnast to qualify for the all-around at the state finals on Friday, which will be hosted by Hinsdale Central after spending the last five years at Lincoln-Way East. 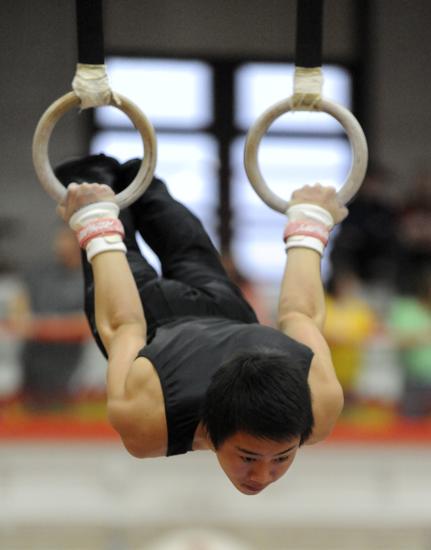 After a five-year run in Frankfort, the boys state gymnastics meet has moved out of Lincoln-Way East. This year’s event starts Friday night at its new home at Hinsdale Central.

That leaves some in area gymnastics circles with mixed emotions. It was a lot of work to host a state tournament, but it brought some prestige to the school and southwest suburbs.

From a competitive standpoint, none of the four Lincoln-Way co-op athletes who qualified for the state meet this year will know the difference as none of them qualified when the meet was in their back yard.

A year ago, Kaleb Hong, who qualified in the all-around, still rings and horizontal bar, wasn’t even in high school yet. He was in the crowd watching.

“I wanted to see what the atmosphere was like; I watched with my sister,” the freshman said. “Since it was at East, it was really convenient. It was great seeing everyone compete. As a team, we would have wanted to be home and have the home advantage. We’re familiar with our equipment — we’ve used it all year. We would be more comfortable with it.’’

“But personally, it doesn’t really matter. Just going to state, no matter where it is, is just cool in itself. Score-wise I think it would be better if it was at home.’’

Hong is one of five area qualifiers and will be the busiest of the group. He’ll compete in all-around Friday night plus two individual events Saturday.

His sectional all-around score of 46.5 allowed him to enter the 30-man all-around field with an at-large bid. That score ranked him 28th out of the 30 competitors. He is one of seven freshmen in this year’s all-around.

“I’m just going to try to do the best I can,” Hong said. “Just being a freshman going to state is cool, but I would definitely like to have my best day. The nerves will be there a little, but not as bad as they were at sectionals.”

If sectional scores are any indication, it appears the area doesn’t have much of a shot as having an individual qualified in the top 10 for the second year in a row.