Host Minooka, second a year ago, finished with 96 points at Thursday's Class 3A sectional, with Yorkville runner-up with 84, followed by Naperville North (66.5), Neuqua Valley (62) and Naperville Central (54). 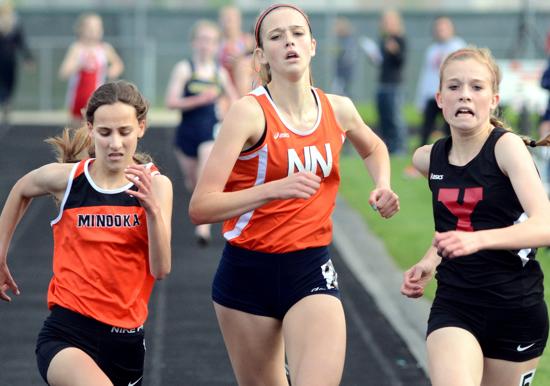 Janile Rogers goes by a simple credo on the track.

“Either first place,” said the Minooka senior, “or nothing.”

Rogers was a whole lot of something Thursday.

“Today was the day to show what we were made of,” Rogers said. “Our goal was to win sectionals — and go to state.”

Minooka, second a year ago, finished with 96 points at the Class 3A sectional, with Yorkville runner-up with 84, followed by Naperville North (66.5), Neuqua Valley (62) and Naperville Central (54).

Rogers is the owner of the state’s top outdoor and indoor long jump, but was sitting in second place Thursday after Neuqua’s Maya Neal went 18-5 on her final jump. Rogers answered by going 18-11.5 in her last attempt, and was all smiles after posting 3A’s second-best effort behind only Rogers’ 19-0.5 from April.

“I watched (Neal) jump. It definitely made me go out harder,” Rogers said. “I was able to get more height which I’ve been struggling with.”

Her wins in the 100 and mile relay weren’t surprises — Minooka was seeded first in both — but the 800 relay was. Taking the baton in third place, Rogers blew past top seeds Naperville Central and Waubonsie Valley to a 1:43.91 finish.
Rogers’ friendly rival in the long jump, Neal, willed herself to state in the long jump and 300 hurdles at much less than 100 percent.

An injury to her heel plate suffered during indoor season has got progressively worse; the last few weeks she’s only done physical therapy and pool work, and sat out last week’s conference meet.

After a tough fourth-place finish in the high hurdles — she was seeded first — Neal found an extra gear in the final straightaway of the 300 lows to beat out Plainfield East’s Mikaela Manson in 45.70 seconds. Similarly, Neal was sitting in third with a non-qualifying long jump distance before popping her 18-5 on the third try.

“I had to win something so it wouldn’t be considered a ‘disappointing’ night,” Neal said. “I had to fight to qualify, which wasn’t an issue in the past.”

With her mother Moji watching for the first time in a “big meet” she blazed to a personal-best 15.19 win in the 100 hurdles, then broke down in tears.

“All my hard work paid off and my mom was here to share in it,” Shodipo said. “This was mostly for her.”

Running for the first time together since indoor state, Dominique Anderson, Kelsey Leedy, Julia Schultz and Skyler Bollinger shaved 13 seconds off the relay’s previous best with a 9:22.19 in holding off Naperville North and Naperville Central.

“That’s the kind of time that gets you to finals next week,” Yorkville coach Ben Draper said.

Later, Alexis Grandys took 18 seconds off her previous best, an 11:00.92 beating fellow freshman Ashley Tutt of Minooka by just .04. Bollinger made it a sweep by holding off Naperville North’s Maria McDaniel in the mile.

“They’ve had some pressure on them this season,” Redhawks coach Mike Stine said. “We were able to qualify; now anything can happen.”

Other sectional winners included Waubonsie’s Allison Wilson in the 800, Naperville North’s Stephanie Mueller in the pole vault, Neuqua’s Olivia Griswold in the shot put, Yorkville’s Anderson in the triple jump and Morgan Harris of Oswego East in the 200.