Lane’s Samantha DeGryse and Young’s Fiona McRaith took turns one-upping each other Thursday in the Public League final at Lane before the Dolphins escaped in the shootout for a 1-0 victory. 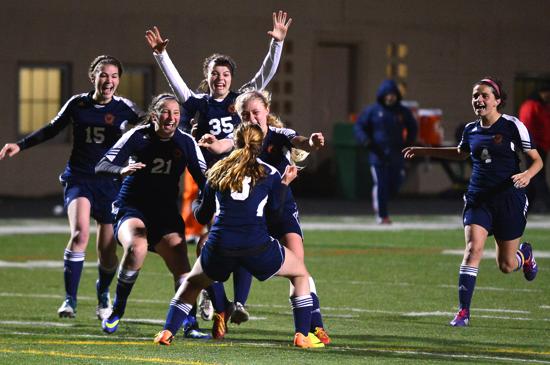 For the second time in three years, Young brought home a Public League title with a 1-0 shootout win over host Lane in the 21st edition of the tournament.

It was a night of goalkeepers — Lane’s Samantha DeGryse and Young’s Fiona McRaith — one-upping each other.

In the end, McRaith came up with the final save in the sixth round of the shootout, while DeGryse was inches from forcing another spot kick.

Young fell behind 3-1 in the shootout, but battled back after McRaith stopped her first shot in the fourth round, setting up a 5-4 shootout victory.

“We’re both highly competitive schools,” Lane coach Michelle Vale-Suarez said. “We both wanted to make sure that neither of the teams scored. Unfortunately that led us to penalties and penalties can be either or.”

The first 20 minutes the game was wide open with the teams trading chances. The rest of the half was controlled by Lane, which held a 5-2 advantage in shots on goal.

In the seventh minute, Lane junior Sofia Pavon, a George Washington recruit, had a breakaway outside the box that drew a caution for a hand ball on McRaith.

Her subsequent 20-yard free kick rocked the crossbar and went over.

In the 36th minute, Pavon fed junior Natalie Wade for a one-on-one chance, but was stopped by McRaith at the edge of the box.

Young (17-4-2) had the first quality chance of the game in the fourth minute when junior Morgan Hawthorn sent a dangerous ball to the back post that went untouched.

In the 16th minute, Indians midfielder Larissa Seibt picked up a poor clearance in the box from defender Gabrielle Schwartz, but pushed her effort wide.

Lane (12-5-3) came out with instant offense in the first minute of the second half as forward Detzi Reveles sprung Pavon, who was blocked at the penalty spot for the game’s best save.

“It was crazy, our keeper was feeling it, she played amazing today,” Young coach Spero Manadkas said. “She stopped four or five breakaways on them. She played absolutely amazing.”

From there, Young had the run of play in the second half.

In the 16th minute of overtime, DeGryse gave up a rebound before securing the ball in mad scramble.

The teams will meet for the third time Wednesday at New Trier in the regional semifinals.