Amid the Lincoln-Way East state qualifiers at the Class 3A Homewood-Flossmoor Sectional, where the Griffins put themselves in position to chase another state title, H-F’s Jayla Stewart still stood out. 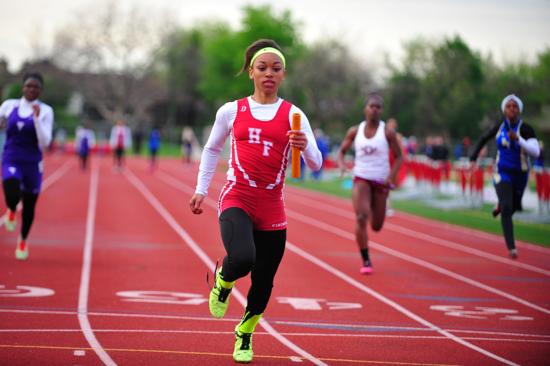 Amid the Lincoln-Way East state qualifiers at the Class 3A Homewood-Flossmoor Sectional, where the Griffins put themselves in position to chase another state title, H-F’s Jayla Stewart still stood out.

A year ago, Stewart suffered a pulled hamstring during the 400-meter relay and had to sit out the rest of the sectional meet.

“I couldn’t run at all,’’ she said. “I was very disappointed. I was crying and everything.’’

Stewart was smiling Thursday night when she raced to a sectional championship in the 100-meter hurdles (14.51  seconds). The H-F junior entered the meet with the top seed (14.17) and lived up to it.

Stewart saw this year’s sectional meet as a chance to make up for what happened to her last year.

“Yes, very much so,’’ she said. “From the moment I actually pulled my hamstring, I was ready to get back to work because I knew I would be able to get back and do much better.

“And so I did. I ended up working really hard in practice, getting my times down each time I ran.’’

Stewart also ran on H-F’s second-place 400 and 800 relays that qualified for the state meet next week.

“She doesn’t really question it. She just does it,’’ East coach Wendy Hegarty said of Hyshaw.

“This meet moved along really quick and the girls stayed on top of their game,’’ Hegarty said.

Thornwood senior Janeah Stewart, seventh in the state shot put last year, earned her second sectional title with a 38-9 on her next-to-last effort.

“Basically, I was just trying to get the technique right,’’ Stewart said. “My coach told me on the throw before that to keep my chest up and to grunt. I did those two and it came out pretty good.’’