Palatine jumps ahead of Barrington for sectional title 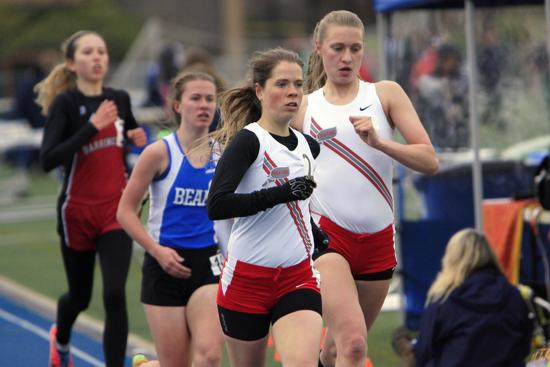 Palatine senior Jessica Lincoln leads the pack in the 3200-meter run at the Class 3A Lake Zurich Sectional Friday. Just behind her is junior Amy Kieliszewski, who won the event. | Mark Ukena/for Sun-Times Media

It got one from junior Megan Thabuteau.

Thabuteau's 35-foot, 5-inch mark in the finals of the triple jump wasn't quite good enough to qualify her for state, but it did propel the Pirates past second-place Barrington on points (106-98) for the overall team title.

A large celebration with teammates and coaches followed.

"That's always the big focus — to send as many girls to state as possible," Palatine coach Joe Parks said. "The team winning is always just icing on the cake. We won last year, too, but we've got a good group and it's always exciting to be able to race in front of a big crowd. A lot of our girls will get the chance to do that at Eastern Illinois in the state finals because of what happened today."

Barrington was on Palatine's heels most of the evening, while Warren (82.5 points) finished third. Despite missing out on the team crown, Fillies senior Rachel Cheever was all smiles after her discus throw of 127-1 sent her downstate for the first time.

"That was my personal record." Cheever said. "I was a little worried because I scratched on my first throw. But when I let the second throw go, as soon as it went, I knew it was gonna be good enough for state."

Lake Zurich senior Tricia Edelmann raced with a severe cramp in the 4x400-meter relay, knowing it would likely be her final high school race.

"Being able to run and be a part of this team meant so much to me," Edelmann said. "Lake Zurich track and field has a big name, and I used to dream about being a part of this team. That dream came true, and I can't thank my team and my coaches enough."