Get the lastest recruiting news on the area’s top prospects, including Bolingbrook twins Jacob and Julian Huff both receiving an offer from Minnesota. 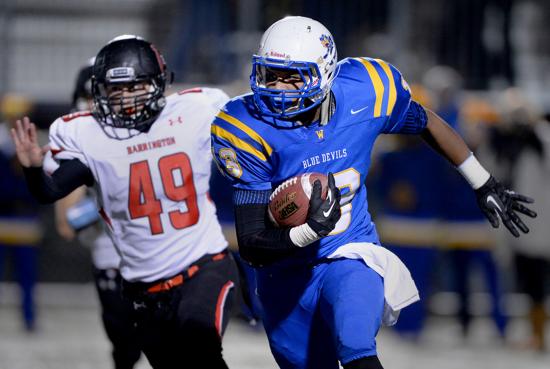 It’s not common for brothers to get the opportunity to play together at the collegiate level, but that’s exactly what Bolingbrook junior twins Jacob and Julian Huff have the chance to do.

Jacob, a defensive back and Julian, a linebacker, have both added offers from Central Michigan, Illinois State, Toledo and most recently Minnesota.

‘‘[Minnesota] coach Jerry Kill said he had seen my film and my family,” Jacob said. “Also, he said that he saw what type of guy I was and the character that I had. Then finally, he said he was going to talk to their defensive coordinator, but he didn’t see what was stopping me from getting an offer from Minnesota. That was when I kind of knew that I would get the offer.”

A package deal wasn’t something that the twins demanded, or even asked for, but they are happy it is coming to fruition.

“Just the experience alone is great,’’ Julian said. ‘‘But if I would have to put my finger on the best part of being recruited with my brother, it is taking recruiting trips as a family, my parents absolutely love it.''

‘‘It was overwhelming when we both got offered, because I know how much both my mom and dad really wanted this for Julian and myself,” Jacob said. “When coach Kill called me and offered all I could do is smile.”

Just a month ago, Raby junior Jamal Milan was a new name on the recruiting trail, and now he’s picked up scholarship offers from all over the country. The most recent schools he added to his list were Maryland and Minnesota.

“I’m loving recruiting,” Milan said. “My favorite part so far has been learning and hearing about each school’s academics.”

The 6-2, 288-pound defensive has picked up 13 offers total, including Illinois, Northern Illinois and Illinois State.

“Schools are telling me that I have a high motor that they love and I would pass the eye test,” Milan said. “They like the way I move with the weight that I am and they complement my character and my personality.”

Warren tight end Caleb Reams received an offer from Syracuse to add to his that includes Illinois, Wake Forest, Toledo and Western Michigan, where he is presently committed. The Orange are interested in the 6-3, 235-pound prospect at defensive end.

“I played a little defensive end during freshman year,” Reams said. “So I know the very basics of it. I also know that I want to be the best player that I can be stepping onto the field at all times no matter what the position. So if it comes to it I will put in as much work as needed to become a great defensive end.”

Offers from Nevada and Northern Illinois are in for Lyons’ Leonard Ross. The junior running back already holds an offer from Illinois.

“I went to Northern Illinois on a visit and they said they really liked me and they asked me to call head coach Rod Carey the next day,” Ross said. “I did and he offered me on the phone. I like that they have great facilities and that the coaches are good people too.

''As for Nevada I was pretty pumped. It’s just a great football program and has nice facilities.”