Emily Kisch drove in seven runs as Burlington Central cruised to a 16-5 victory over Aurora Central in the first round of the Immaculate Conception tournament on Friday. 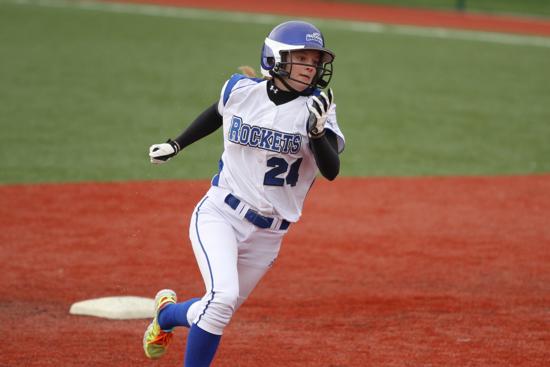 The Rockets pounded out 15 hits in an opening-round play of Immaculate Conception's eight-team Knight Invite to earn 16-5 victory in six innings over Aurora Central on Wednesday.

“If one person starts hitting it seems like everyone starts crushing the ball,” Rockets shortstop Tori Harvey said. “I think we’ve finally gotten to a point where our lineup is set. We’re getting ready for the postseason.”

With IC’s home field unplayable due to the rain, Friday’s game was played on the artificial turf at Nazareth. Burlington Central will play Saturday’s second round against Friday’s winner between Momence and Morrison.

“For the first game of the tournament, I was happy with it,” Rockets coach Wade Maisto said. “I liked how we were swinging the bats and our defense was fine. And I like that we’re getting contributions from girls up and down the batting order.”

Nobody contributed more to the Rocket’s win offensively than center fielder Emily Kisch, who finished with four hits and seven RBI.

The Rockets (18-7) led 3-0 after an inning on a two-run double from Kisch and a sacrifice fly from Kassidy Gaylord. Aurora Central (14-11) tied the game in the third on a three-run homer by Gabi Alfaro but Burlington Central answered with three in the bottom of the inning, led by a two-RBI double Kassidy Gaylord.

Aurora scored twice in the fifth to cut Burlington’s lead to 7-5, getting RBI’s from Mary Wileman and Paige Miller, but the Rockets scored three in the bottom of the inning and scored six more in the sixth.

Brooke Gaylord ripped a two-run single down the line to end the game.

“It’s a good-hitting team and (Gaylord) kept the ball away,” Aurora coach Tom Babyar said. “We were taking too many outside pitches. You have to look away and drive it the other way instead of hoping she comes into your zone.”

“But I can live with a game like this. It’s not like we lost the game. They went out and won the game.”