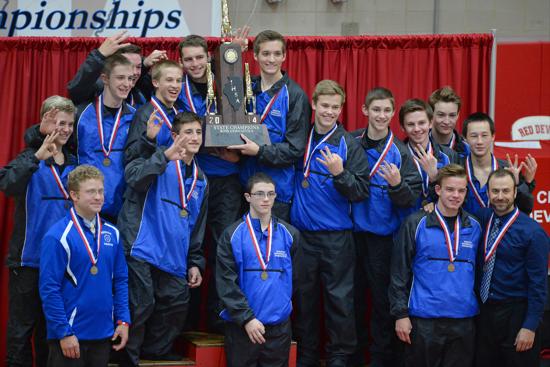 The team left no doubt in Hinsdale Central’s gym on Friday night, winning its third consecutive state title with161.55 points, easily ahead of the eight-team field. Runner-up Stevenson edged third place Lyons 153.7 to 153.65.

“We came ready to compete,” Wheaton Co-op coach Greg Gebhardt said. “We practiced hard last week. We went into the gym and did a lot of work and then went out and went 27-for-30 tonight. I mean, that’s impressive to do, especially during a championship with this kind of intensity.”

Senior David MacDonald, who was in action for just the second time since suffering a mild concussion in the Donaldson Invite in April, won his second straight all-around title with 56.1, which included a 9.7 on parallel bars and meet-best 9 on high bar, the same event where he sustained his injury.

“I was probably a little more nervous than I thought I’d be just knowing it was the last meet,” he said. “I got to thinking though after the (still) rings. I realized I should just go out there and have fun.”

There’s been plenty of fun at Wheaton Co-op these past four years. After winning the first state title in school history in 2005, the program had a little lull before taking second place in 2011 and now winning three straight titles.

Senior Ethan Sansone, a fixture the past four years, placed second in the all-around with a 54.2. He was seventh last year and fourth in 2012.

“We put in a lot of hard work so this is what you get out of it,” he said. “It seems like this was meant to be.”

“The guys all coach and motivate each other, and they all contribute,” Gebhardt said. “We’ve been fortunate to have a bunch of great guys who have worked hard all season.”

Lyons’ Chris Rediech placed third in the all-around with a 53.45 and was followed by Stevenson’s Zack Gilbert (53.3) and Libertyville’s Alex Pong (53.1).

Glenbard West freshman Max Diab, whose brother Alex Diab won the all-around title in 2012, was the top freshman, placing seventh with a 52.25.