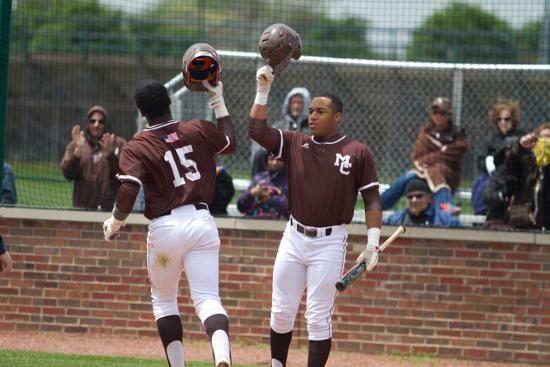 With Brother Rice defeating St. Laurence in a faster-paced game Saturday, Zunica’s Mustangs knew the Catholic League Blue title was there for the taking.

Mount Carmel wasn’t too interested in helping out though. The visiting Caravan slugged its way to a 12-4 win to prevent St. Rita from winning the Blue title outright.

“Talk about backing into it,” Zunica said with a laugh. “That’s what makes the Blue special. We’ve [St. Rita] been playing for 103 years, and winning the Catholic League Blue is still a special thing. Our kids will eventually enjoy it, but it’s hard to enjoy it on a day you lose.”

That loss figured into the Caravan’s thinking in a big way Saturday. Trailing 3-2 through four innings, Mount Carmel blew up at the plate in the fifth.

The Caravan sent 14 men to the plate in the inning and scored nine runs, six of them with two outs. After a Jeremy Houston RBI single, Malik Carpenter’s hard-hit two-run single tied the game at 5. Three batters later Nick Wheeler smashed a bases-clearing double to the right-field gap to blow open the game against St. Rita ace Mike Costanzo.

“Thursday as a team we weren’t sticking with our approach,” Carpenter said. “The coaches got on us, we worked hard in practice and got back to our approach. Their pitcher was getting tired and we took advantage.”

Houston added another RBI in the frame with a bases-loaded walk. The Caravan drew five walks and managed six hits in the inning.

“We wanted to come back with fire today,” Wheeler said. “It’s a confidence boost, and we knew we had to push ourselves. One [hit] after another, and everybody kept hitting. It got contagious and kept on rolling.”

Marco Boricich (5-1) got the win, throwing 5 2/3 innings and giving up three runs on seven hits and five walks.

The Caravan couldn’t spoil the conference title, but a win against a big rival? Carpenter will take it.

“It makes us happy,” a smiling Carpenter said. “It lets us know we can do anything and beat a rival. That’s a good feeling.”

St. Rita wore gray jerseys with ‘LLJ’ (Live Like John) across the back in tribute to former St. Rita baseball player John McNicholas who passed away at the age of 15 in 2011 from brain cancer.