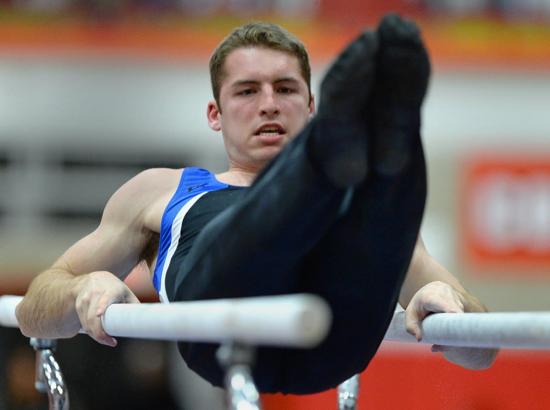 Apparently, David MacDonald had one more gymnastics meet left in him.

“I love gymnastics, but I’m not a big fan of the meets, to be perfectly honest,” he said. “I hate the pressure, but I love the sport. I figured this would be a good time to end.”

MacDonald treated his fellow gymnasts and the fans to another spectacular performance a day after winning his second consecutive all-around title.

MacDonald won the floor exercise with a 9.5, still rings with a 9.2, parallel bars with a 9.45 and tied Glenbard West senior Perry Zumbrook for top honors on vault with a 9.75. He won four individual titles and he finishes his two-year career with eight.

“It’s bittersweet because it’s the end for me, but I’m very happy with how I was able to finish,” MacDonald said. “It’s just been amazing to be a part of this team the past two years. I’m definitely going to miss it.”

“It’s my first title ever,” Sansone said. “If I could’ve won one event in high school I would’ve wanted it to be pommel horse because it’s my favorite event. I’m glad I was able to get the routine for state finals.”

If you’re looking for a clear favorite for next year’s all-around champion, there’s no doubt that Niles West sophomore Dalai Jamiyankhuu would have to be at the top of your list.

Jamiyankhuu won high bar with a 9.2 and finished in the top four in the remaining events, included second place finishes on pommel horse, floor and parallel bars.

​“It was a pretty good day because I planed to get first on high bar, which I did, so I was very happy about that,” he said. “It was a good weekend. It was good making it as a team for the first time in 29 years, which was a big accomplishment for the team. I really enjoyed it.”