Aurora Central's Karina Liz learned a valuable lesson about pacing herself and learned it well. She specializes in shorter distances — 800-meter run and the 400-meter dash — these days but continues to win most of the time. 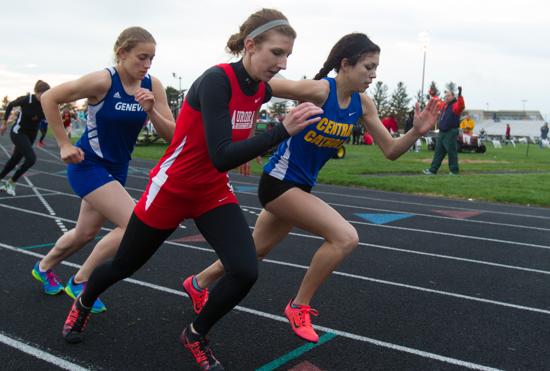 Karina Liz still remembers her first competitive race when someone suggested she run the mile.

“Fifth grade. First track meet I ever went to,” the Aurora Central sophomore said. “I thought, ‘OK, I’ll do it.’

“First lap I went out super fast, so the second lap I was practically walking. I finished in first and I almost threw up. But it just felt good to win. That’s why I’ve always loved it.”

Liz learned a valuable lesson about pacing herself and learned it well. She specializes in shorter distances — 800-meter run and the 400-meter dash — these days but continues to win most of the time.

“My goal was just to hang with her but I had a little bit of an off day,” Mead said. “[Liz] is really competitive and I haven’t run against anyone that fast in a while.”

ACC coach Troy Kerber, noting that Mead is a returning All-Stater like Liz, was pleased with his lone state qualifier.

“I think [Liz] is physically stronger this year and racing very much under control,” he said. “With her economy of stride she’s poetry in motion. She chews up the ground.”

She qualified for state in both as a freshman, taking second in the 800 and not qualifying for the 400 finals.

“My favorite, overall, is the 800, even though sometimes I kinda freak myself out about it,” she said. “I just really love to run the 400.”
In the shorter race, she said, “You’ve gotta go fast and all out.”

“You need to know what to do in the 800,” Liz said. “When to challenge someone, when to speed up, when to lay back.

“I believe that I’ve really got into the mental aspect of it a lot. My third 200 [meters] of the 800 has really improved. I think I’m just a lot mentally stronger.”

She uses a standing start in the 400, but plans to work this summerm with starting blocks, which are allowed in that event but not the 800.

“I think eventually [blocks] would help me bring down a few tenths of a second from my time but I feel more comfortable without them for now,” she said.

Liz will enter the 800 as the top returning 2A finisher at state but takes nothing for granted.

“I’m just a sophomore and I have two more years left,” she said. “I’m going in with the mentality that I want to win. I’m not gonna be devastated if I don’t.”

It will depend on how she runs.

“If I run a bad race [and lose], I’m frustrated,” she said. “If I hit a PR and lose, I know it’s all I could do that day. You can only control your race, not anybody else’s [race]. Someone might have a really good day and you might have an all right day. That’s how I see it.”