Karli Dobler took over in the circle for South Elgin in the second inning and pitched out of a bases-loaded jam. She held Bartlett to a single run the rest of the way as the Storm clawed its way back for a 9-7 win Monday. 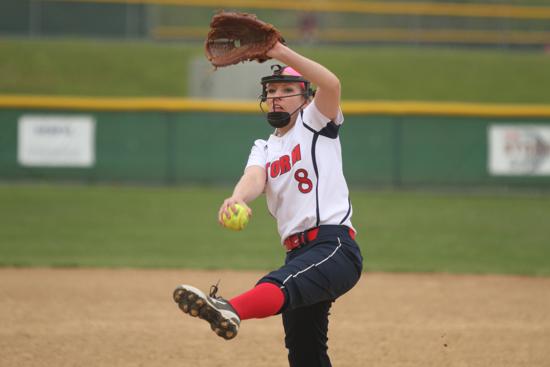 A simple blood test would no doubt reveal the shocking truth about South Elgin sophomore pitcher Karli Dobler: the kid has ice water in her veins.

“I’m just really confident in my team,” Dobler said. “That’s why I’m not rattled. When I throw something, I know they’ll make a play.”

With her team trailing Bartlett by five runs in the Upstate Eight game, Dobler took over in the circle for South Elgin starter Paige Allen in the second inning with the bases loaded. She pitched out of the jam and held the Hawks to a single run the rest of the way as the Storm clawed all the way back for a 9-7 win.

“(Dobler) just has a calming effect on us,” Storm coach Stephanie Katzenberger said. “She doesn’t show any emotion in the circle. She just goes to work.”

The Storm’s Cassidy Westlund tied the game at 6-6 with an RBI single in the fourth inning and then tied the game 7-7 in the sixth on another RBI single. South Elgin (15-12, 9-8) went up 8-7 on a throwing error on the play before Alyssa Buddle’s RBI single scored Westlund with the game’s final run.

Bartlett coach Jim Wolfsmith wasn’t pleased with some sloppy play by his Hawks, but he was quick with a disclaimer.

“Give South Elgin a lot of credit,” Wolfsmith said. “We made too many mistakes but they took advantage of those. And Dobler came in and really kept us off-balance.”

“Karli is doing a great job,” Storm catcher Buddle said. “She was hitting her spots, and she knows it’s not about striking everyone out. It’s about letting her defense work.”

Bartlett built a 6-1 lead in the second thanks to a grand slam and an RBI double from Dana Paul and an RBI single from Alyssa Nowak.

South Elgin’s Mallory Mecklenburg hit a three-run homer to cut Bartlett’s lead to 6-4 in the bottom of the second. After Westlund’s game-tying hit in the fourth, Bartlett took a 7-6 lead on a sacrifice fly from Kayla Haberstich.

Rachel Ziemba walked and Mecklenburg singled for South in the sixth to set up RBI hits from Westlund and Buddle. Bartlett got singles from Nowak and Amy Johnson before Dobler retired the game’s final two batters with Hawks on first and third.

“We’re streaking and what it comes down to is, when we’re hitting, we win games,” Katzenberger said. “We scored on a lot of miscues today and I like the way our girls are staying aggressive out there.”