Larkin ace Jack McCracken, who has chosen to not play competitively in college next season, will try to keep his high school career alive for as long as possible with a deep playoff run. 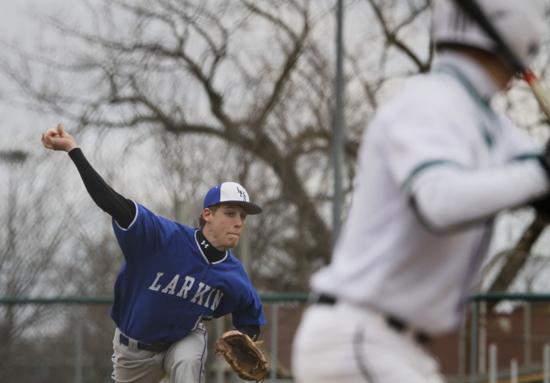 It’s every high school baseball player’s goal to extend their season as long as possible once regionals begin, and Larkin senior pitcher Jack McCracken is no different.

McCracken knows when this season ends, his competitive career is over because of his academic choice. A 30-plus ACT student who plans to major in biology, McCracken could easily have continued playing at a smaller college — especially after the season he’s had. He owns a 6-2 record with a 1.21 ERA.

Instead, he’ll be going to Indiana. And while he’s had a good season, McCracken isn’t at a Big Ten level athletically even if he exceeds it academically.

“It was really a tough choice,” he said. “It’s making it tougher this year because I’ve been pitching so well. But I really like my choice, like Indiana.

“I’ve wanted to go there, and visited and have no regrets.”

McCracken made his choice before this season. Now, extending his career will become a matter of whether the Royals (13-17) can come up with the offense and glove work needed to beat Rockford Jefferson in a Class 4A DeKalb Regional quarterfinal game Monday, and then two days later against top-seeded area power Huntley.

Coach Matt Esterino and McCracken think the Royals can be a tournament team. Every team with a losing record wants to take advantage of their second chance in the postseason, but the Royals believe they have the credentials to do it because they have two top pitchers with the McCracken-Brayden Royse combo, and a lot of experience in tight games.

“I think we’ll be really tough in the tournament,” McCracken said. “We haven’t been beaten by a lot very much. We’ve been tough all year.

“It’s going to come down to something right at the end of a game. We’ve been in a lot of close games, so I think we’re prepared for it.”

“He throws strikes, keeps the ball down in the zone and keeps us in baseball games,” Esterino said. “That’s what we expect from senior leadership.

“To be honest, Brayden has thrown just about as well as Jack, we just haven’t scored for Brayden.”

After a season-opening 9-4 win over St. Edward, Royse (2-5, 1.30 ERA) hasn’t had his team score more than three runs while he’s been on the mound. Four times they scored two or less. McCracken hasn’t had the best offensive support, either. Going into Tuesday’s regular season-ending series with St. Charles East, Larkin has been in 16 games decided by two runs or less and 10 by one run.

“We know that whoever we play, when we play like we normally can it’s going to be a baseball game,” Esterino said. “We know we’ve got to execute offensively and pick up the ball defensively behind our pitchers, but when you’re in those (tight) situations continuously throughout the year, the next time we do it we’ve been there before.

“We’ve been in so many one-run situations that guys are starting to come through when they didn’t earlier in the year.”

It’s the time of year when coming through can mean extending seasons and careers.