Dusty Behringer has stepped down as head football coach at Sandwich after three successful years. 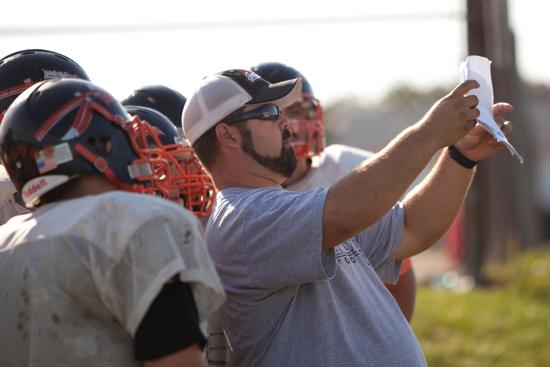 Dusty Behringer has stepped down as head football coach at Sandwich after three successful years.

The Indians went 20-12, made three straight playoff appearances including a run to the quarterfinals in 2011 and won the Interstate Eight Conference title in 2012 under his direction.

“I will continue to teach (social studies) at Sandwich Middle School and coach the girls track team,” Behringer said.

“I had some opportunities I turned down over the winter and didn’t pursue because I was the head coach at Sandwich. After conversations with my wife and family, I may decide to pursue those opportunities.”

Behringer said he could not reveal what they were. He indicated he may not be through with coaching football but was quick to note he would not be the head coach at a different high school.

Behringer has been involved with the Sandwich football program for 15 years, serving as offensive line coach for 12 seasons that featured three more playoff appearances, including a run to the semifinals in 2010, as well as a conference championship the same year.

“I’d like to think I played a part in helping turn the program around,” he said.

“I want to commend him,” Cassie said. “It’s been a pleasure to work with him. He set a great example and his record speaks for itself with three straight playoff appearances.

“He’s been the type of guy who put in an awful lot of time, especially in the summer but throughout the year as well. He was very committed to his craft and it was a massive commitment that he was willing to make, and we’re grateful for that.”

The search for a replacement has begun.

“I’m sure it’s a position that plenty of quality coaches will look at because of where the program is,” Cassie said. “We have quality kids doing tremendous things.”

Behringer and his wife Beth have two boys and a girl: Braden, 6; Ashlyn, 4; and Tanner, 16 months.