Jaimie Robinson decided not to follow in her NBA all-star father Glen Robinson's footsteps when she joined the De La Salle track team. The freshman will be a favorite in Class 2A in the horizontal jumps for this weekend's state meet. 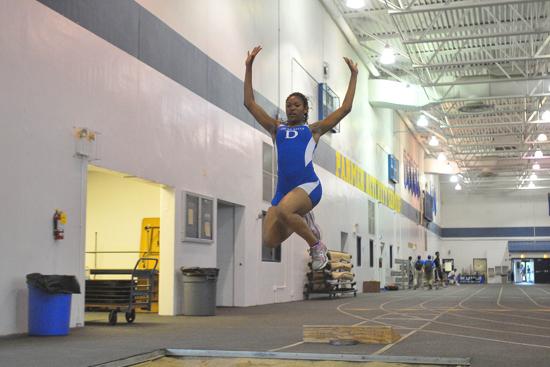 Jaimie Robinson's dad isn't unusual in that he suggested she pick up the sport he used to play.

He is a little out of the ordinary in that he was a No. 1 overall draft pick, a two-time NBA All-Star and the consensus college basketball Player of the Year as a senior at Purdue in 1994. You've probably heard of him: Glenn Robinson.

"He's pretty supportive of what I do," Robinson said, adding with a smile, "Even though he's like, 'You should try basketball.'

"But he knows I'm into track."

Indeed. The De La Salle freshman is one of the favorites in Class 2A in the horizontal jumps for this weekend's state meet at Eastern Illinois University in Charleston.

Robinson didn't start triple-jumping till last summer, but her outdoor season-best of 37 feet, 11.5 inches is the second best in 2A this spring, according to DyeStatIl.com. She's also among the 2A leaders in the long jump at 17-4, but the triple is her favorite. She's a quick learner, taking a bronze medal at a national age-group meet last year after just a few months of practice.

That Robinson's a good athlete isn't a surprise given sports are pretty much the family business. One brother, Glenn Jr., is getting ready to follow his dad's footsteps to the NBA and another son, Gelen, is headed to Purdue for football. Gelen also is a two-time state wrestling champ at Lake Central (Ind.) and is aiming to sweep the throws at the Indiana prep boys track and field finals next month.

"It's been fine," Robinson said of growing up in an athletic family. "I'm used to it. I'm not pressured or anything."

Robinson actually did try hoops when she was younger and it got her onto her current path in a roundabout way. "They said I did a pretty good job [in basketball, but] I never noticed it," she said. "I ran up and down the court. They said, 'You were pretty fast, you should try [track].' I was like, 'I don't know.'"

But she had to try something. "Since I was home-schooled through the years, my mom was like, 'You're not doing anything. Your'e just sitting in the house working, so I'm going to put you in a program that does all seasonal sports.'"

That led to running track at local Hershey's age-group meets, trips to nationals and eventually to club competition.

"Did I know she was going to be as good as she is now? No," McMiller said. "But the potential was there. She has a tremendous work ethic."

That sometimes leads to a little pushback when McMiller says practice is over and Robinson doesn't want it to be.

"I strive to get better," she said. "I never really noticed I was like that. I guess I have been because I was like, 'We're done?'

It's something that seems to run in the family.