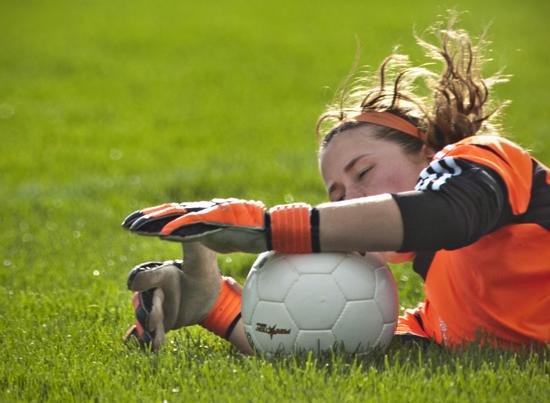 Oswego’s Amy Annala has heard that goalkeepers have to be a little insane to play the position.

As a kindergarten AYSO player, Annala started off as a forward as well, but decided any position other than goalkeeper involved “too much running.” By second grade, her parents had seen enough face-first dives at balls they had just one thought: “We’ve got to get her a mouth guard.

“Pretty sure those have saved me a few teeth over the years,” Annala admitted.

Annala’s shutouts have gone from four as a freshman improved to seven as a sophomore, nine last year and 11 this season.

Another measure is Oswego’s participation in the PepsiCo Showdown, where the Panthers were 2-6-1 in three years, yielding 28 goals. This season, Oswego lost a 1-0 opener to Lake Zurich, a top-20 program, before posting three straight 1-0 victories.

“Those four matches made us realize we can compete with the big-name teams,” Annala said.

The Panthers realize they have a tough road as the sixth seed facing third seed — and No. 8 ranked — Metea on its home field. Should Oswego manage a win, the sectionals most likely would bring a rematch with No. 6 rated Plainfield North — the program that denied them 3-0 loss for a regional title in 2013.

The Tigers finished ahead of the Panthers in the Suburban Prairie Conference the last four years, including this season’s 1-0 setback.

“Her 19 saves (against North) were one of the greatest performances I’ve ever seen,” Oswego coach Brian Falli said. “She changes games with her play. Yes, she makes all the saves she’s supposed to make, but she makes so many she’s not supposed to.

“There’s no doubt she’s a vocal leader in back, but she’s a leader on and off the field as well. Amy played a big part in our fundraiser and she works with all of our young players because she wants to look out for the future of our program.”

Annala, who also earned three varsity letters in basketball, admitted she simply hoped to play collegiately, even if it was NCAA Division II or III. However, the Northern Illinois signee now desperately wants her high school career to continue.

“Our team chemistry is the best it’s ever been and I’m so grateful for all the teammates I’ve had the privilege to play alongside,” she said. “But I’m really most thankful to my parents for all the support, traveling to practice and matches for high school and club, plus all the mouth guards.

“And I’ve had some great coaches like Brian Falli, Kelsey Hoinkes, Jamie Bartkowiak at Oswego, Brian Udy with the Panther Soccer Club, and my keeper coach, Abel Perez.”