Stevenson moved one step closer to its goal of returning to the state title game with a 12-7 win over Brother Rice in Thursday's quarterfinals. 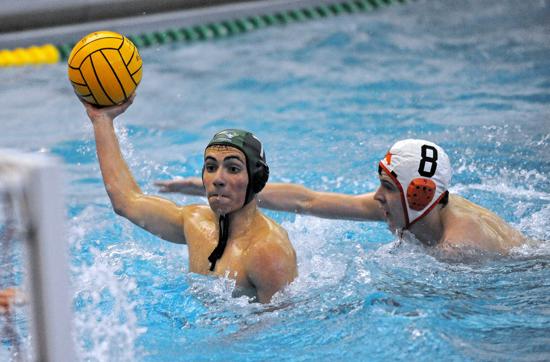 After losing to Fenwick in the state title game last season, Stevenson’s long-range goal was to get another crack at a state crown.

That may have led to some slow starts during the regular season. But once the Patriots were back in their home pool for the state quarterfinals Thursday, the motivation to get off to a fast start was back.

Stevenson jumped all over upstart Brother Rice, opening a 7-0 lead. The final tally wound up 12-7.

Stevenson will face Loyola, a team the Patriots have lost to twice this season, at 10:15 a.m. Saturday in the state semifinals.

“We were kind of like a caged animal,” Stevenson coach Sean Wimer said. “We’ve had some slow starts. These guys still have the taste of last year’s state championship in their mouths. They used it as motivation all offseason. They finally had the motivation that wasn’t there for them [during the regular season]. The state tournament arrives, they have the motivation.”

Team scoring leader Mitchell Sokolsky got things started with two goals in the first quarter for Stevenson (27-7). Alex Divanyan, Alex Kapecki and Michael Taiberg each scored twice and Kurt Holzer added a goal as the lead swelled to 9-1 at the half.

Holzer and Kapecki are sophomores. Divanyan and Sokolsky, both seniors, led the Patriots with three goals apiece.

“We have a strong senior class,” Sokolsky said. “We got the younger guys motivated and we came out and proved to ourselves how much we wanted it.”

Brother Rice (11-18) got things going in the second half. Matt Bachler and James Ryan each scored two goals as the Crusaders trimmed the final margin to five.

“Some stuff wasn’t working in the beginning,” Brother Rice coach Tony Cichowicz said. “We switched some stuff up later on that was working, but it was too late. They played good. You can’t ask for anything more from them. They’ve got nothing to be ashamed of. These guys played their hearts out.”

Stevenson moves on to face the Ramblers, a team that has given the Patriots some problems this season. The first loss, 9-7 on March 18, was played without Stevenson’s star freshman, Andrew Shashin. The second time around, a 9-8 loss on May 3 in the Patriots’ home pool, saw Stevenson blow a 5-3 halftime lead.

“We wanted it,” Wimer said of a rematch with Loyola. “We wanted it really bad. I know the guys wanted them since the last two games.”

The final four teams are so evenly matched that any has a chance to win it all. Naperville North and defending state champion Fenwick play in the other semifinal.

“Coach said it comes down to who wants it,” Sokolsky said. “I know us, we want it bad. If another team wants it more than us, I don’t think that’s possible.”