Thornton’s Tifonte Hunt edged Bloom’s Daylen Hubbard in the 110-meter hurdles to help lead the Wildcats to the team title of the Class 3A Homewood-Flossmoor Sectional on Thursday. 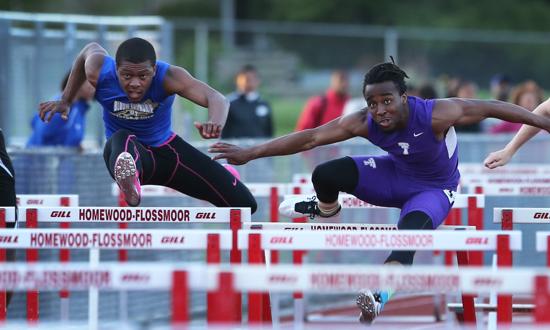 In a meet loaded with elite sprinters, back-to-back races at the Class 3A Homewood-Flossmoor Sectional won’t take a back seat to the state finals.

Thornton’s Tifonte Hunt raced to the hurdles title in a photo finish that had observers on the track wondering who won the event. Hunt clocked 14.28 seconds to barely edge Bloom’s Daylen Hubbard (14.29) in a race that qualified six runners to the state meet.

“That was actually the best hurdle race I’ve ever been in,’’ Hunt said. “I hit the last hurdle. I thought that was going to mess me up. I just had to finish at the end.

The sectional times ran by Hunt, who was ninth in the state last year, and Hubbard would have been good enough for third place in the 2013 state final.

Thornton sprinter Jauan Wesley had plenty of life in his legs. Wesley, seventh in the state 100 last year, won the sectional in 10.83 after he anchored the Wildcats’ 400 relay with Martise Craig, Cavion Clanton and Hunt to first place in a blistering 41.43.

“I knew I had stiff competition with [Lincoln-Way North’s] Julian Hylton,’’ Wesley said of last year’s state runner-up who didn’t advance in the 100 . “I’m just trying to progress and catch up, so I can take first this year.’’

“I’m happy because I won, but I’m not really satisfied with the height,’’ Monroe said. “I just need the competition to do it.’’

Lincoln-Way Central opened the track events with a win from its 3,200 relay (8:08.50) of Ben Alvarado, Phil Rinaldi, Alekos Mitchel and Ben Zibricky.

Thornton claimed the team title in the 14-school field with 95 points over runner-up H-F (66) and third-place Bloom (59).