With coach Jim McLaughlin stepping down, the Homewood-Flossmoor job will be a coveted, sought-after position. But it wasn't the biggest coaching opening this year. Here is a breakdown of the best high school basketball coaching jobs that opened up this spring. 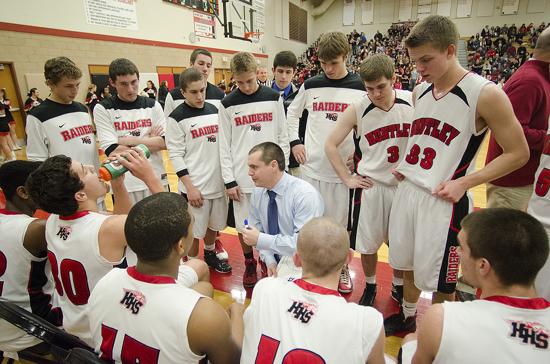 Richards coach John Chappetto had announced he was stepping down earlier in the month, leaving a very solid and stable basketball coaching job open.

Schaumburg and Kenwood were also appealing for different reasons –– Schaumburg was an established program with a bunch of success over the past 15 years, while Kenwood is considered an up-and-coming program brimming with potential in the city.

But by the end of March, arguably the highest profile high school coaching job in Illinois opened. Quincy, a basketball program no other in this state can match when it comes to history. tradition and probably pressure, shockingly –– and shamefully –– fired Sean Taylor.

And now in the month of May a couple of high-profile jobs have also popped open in the Chicago area with Don Kloth stepping down at Zion-Benton and the resignation of Jim McLaughlin at Homewood-Flossmoor this week.

The City/Suburban Hoops Report ranks the best basketball jobs that have opened this spring, with a look at what jobs remain open and who filled the others.

Who’s out: Coach Sean Taylor, who led Shelbyville to a state title in 1996 and went 113-36 in five years there, spent the past 11 years as coach of the the storied Quincy Blue Devils. Taylor went 194-107 and won six regional championships. The school board, however, voted to fire Taylor in what was a controversial move in this basketball-crazed town.

Why it’s No. 1: Some will say the program has lost it’s luster. Many will say the expectations are unrealistic. While that all may be true when comparing this program to what it was from the 1950s through the 1980s, it’s still one of the storied, most revered programs in the state. Few schools have the type of basketball following and passion Quincy enjoys. It’s still a very big deal to lead this program.

Quincy is one of the winningest high school basketball programs in the country (approaching 2,000 wins in the program). There are 13 state trophies (top four finishes) in the trophy case, including a couple of state titles, but there hasn’t been a sectional championship since 2000.

Who’s in: Quincy went and hired one of its own, bringing back former player and QHS graduate Andy Douglas, who was a part of the last Blue Devil team in 1998 that brought home a state trophy, finishing third in Class AA. He’s the nephew of Quincy legend and former University of Illinois star Bruce Douglas. Andy Douglas has spent the past four years as head coach at Liberty, a small Class 1A school just east of Quincy.

Who’s out: Jim McLaughlin is one of the most highly-respected coaches in the Chicago area. He stepped down this week to spend more time with his family after going 201-62 in nine years at H-F, where he won eight conference titles, eight regionals and two sectionals.

Why it’s No. 2: There are many who will argue H-F is one of the top 10 basketball jobs in the Chicago area. It’s certainly one of the elite jobs in the south suburbs. For starters, there is a deep pool of basketball talent, along with some basketball tradition. H-F has won eight sectional championships, including a state runner-up finish in 2004 with coach Roy Condotti and star Julian Wright. Throw in an established community, strong academics and quality facilities and H-F is appealing in many ways.

Who’s in: The departure of McLaughlin is still too fresh to label any favorites or rumored candidates. Whether or not H-F hires from within (assistant coach Marc Condotti?) remains to be seen, but if it is opened up there will surely be some high-level, quality candidates that apply. But unlike college jobs, a lot of different things have to match up at the high school level, including current teaching openings. We’re in late May, so the timing isn’t ideal.

Who’s out: After a lengthy and successful 25-year run, coach Don Kloth stepped down to work as an assistant coach on Warren coach Ryan Webber’s staff. Kloth won 528 games in 25 seasons, with 14 regional championships and a state runner-up finish in 2008. His teams won 20-plus games 18 different seasons.

Why it’s No. 3: There always seems to be an abundance of basketball talent at Zion-Benton, including recent stars Milik Yarbrough and Lenzelle Smith, who just finished up his college career at Ohio State. It’s an established program that plays in one of the state’s elite conferences (North Suburban Lake) and has had a ton of success over the past 20 years. The next coach will also be able to build around returning star Admiral Scholfield.

Who’s in: Kloth just stepped down less than two weeks ago, so the search is on for his replacement. There have only been two basketball coaches at Zion-Benton in the past 39 years –– Kloth for 25 and Phil Judson for 14 years before him.

Who’s out: In what was a move that raised eyebrows and created some controversy, Jim Maley was let go after three seasons. Maley, who has since resurfaced and was recently named the head coach at St. Laurence, went 16-9, 15-12 and 15-13 in his three years.

Why it’s No. 4: For years, those in-the-know when it comes to Chicago Public League basketball have labeled Kenwood a “sleeping giant.” Kenwood is a school that’s strong academically and is in a desirable neighborhood with basketball talent on the South Side it can tap into. The bulk of the team returns, including a pair of sophomores in 6-5 Nick Robinson and transfer Zion Morgan who are considered two of the top players in the Class of 2016 in Illinois.

Who’s in: Kenwood hired a good one in Marlo Finner, the former assistant coach at Simeon who led University High to a regional championship as head coach this past season. Finner is a class act and brings a presence.

Who’s out: Matt Walsh, who replaced highly-successful Bob Williams, went 87-58 in five seasons as head coach. He led the Saxons to three Mid-Suburban League West titles and three regional championships. But Walsh, who was considered one of the better young coaches in the Chicago area who had his teams playing their best when it mattered most, stepped down in late March to spend more time with his family.

Why it’s No. 5: Despite the fact the program is in the midst of a down cycle when it comes to talent –– at least in comparison to where it’s been –– the Schaumburg job is still a quality one with a strong basketball culture. Williams built the program into one of the best in the state in his 18 years, winning nine regional titles and making three trips to Peoria. Schaumburg won the 2001 Class AA state championship. It plays in a winnable Mid-Suburban League conference and –– here is the biggest underrated aspect of the job –– is in one of the higher paying school districts in the entire state.

Who’s in: After leading Huntley to its best basketball run in school history, Marty Manning takes over at Schaumburg. He’s familiar with Mid-Suburban League basketball. Manning is a Hoffman Estates graduate and was the point guard for a Hoffman States team that reached the Class AA Elite Eight in 1996. In eight seasons at Huntley, Manning averaged 20 wins a year with five regional titles and four straight conference championships.

Who’s out: John Chappetto put together an outstanding 12-year run at Richards, which included 10 winning seasons, five 20-plus win seasons and a 30-win state championship team in 2008. Chappetto, who won 219 games, is a respected coach and man. He energized the Richards program in his dozen years as head coach.

Why it’s No. 6: While it’s always been a football school and power, Chappetto did a wonderful job of building the presence of the basketball program. Richards is the dominant team in the South Suburban Red, winning eight consecutive league titles –– and nine straight conference championships overall. Plus, there’s that still somewhat recent state championship in 2006 and the fact one Dwyane Wade starred at the school. All of those pluses, along with the fact there always seems to be a little talent walking the halls of this Oak Lawn school, has made Richards an appealing job.

Who’s in: Jevon Mamon isn’t a big coaching name –– yet. But he’s quickly earned a reputation as one of the top young, up-and-coming coaches in the Chicago area. The very sharp Mamon, who has been an integral part of the Meanstreets Club program on the AAU circuit, compiled a 43-39 record in four years at Perspectives-Calumet.

Who’s out: Marty Manning left Huntley, where he compiled a record of 162-68 in eight seasons, for Schaumburg.

Why it’s underrated: Huntley basketball has been on a roll with five 20-win seasons in the past eight years. Throw in five regional championships and being the dominant team in the Valley Division of the Fox Valley Conference –– Huntley has won four straight league titles –– and a winning culture has been established. Plus, the school enrollment continues to grow, with numbers soon to tip 3,000 students, and a new fieldhouse will soon be completed.

Who’s in: Huntley just recently hired Will Benson, a young 31-year-old head coach who has already had head coaching stints at both Harvard and Marengo. Benson put together a record of 26-58 in three seasons at Harvard. He led Marengo to a 20-win season this past year in his lone season as head coach there.

The Class of 2023 was highlighted earlier in the month. Many were on display this past weekend at the Pangos event… https://t.co/7X8mTtAX11

RT @michaelsobrien: Jeremy Fears Jr., one of the top sophomores in the country, is leaving Joliet West for La Lumiere. "Jeremy did not wa…

RT @michaelsobrien: The pandemic didn’t stop the Pangos event, which was held again in La Grange last weekend. Many of the top freshmen and…