Heather Baran was a sweeper with her club team before entering Trinity, where she leads the Blazers with 10 goals this season. 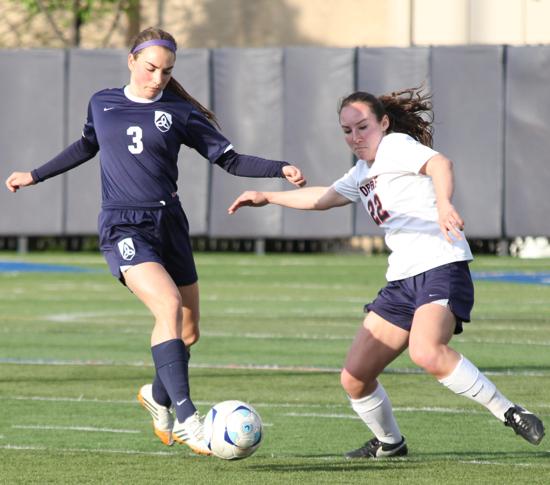 In fact, her position was the complete opposite. Playing sweeper for her club team, Celtic FC Chicago, she was the last line of defense before the opponent was 1-on-1 with the goalie.

But Blazers coach Dave Preston saw something special when he watched Baran practice as a freshman.

“Like every good soccer player, she stands above [her opponents] by having the smarts on the field,” Preston said. “She has a nose for the ball and to be in the right place at the right time. She can finish at the goal when she has the opportunity, or she can pass it.”

Preston’s instincts paid off. Baran scored 10 goals as a freshman and she showed it was no fluke by scoring 10 more to lead the team this season.

“It’s hard to say,” Baran said. “I like to score and I like to defend. It doesn’t matter to me. It’s all about what the team needs.”

The last part is a theme that Baran hammers over and over. Doing whatever the team needs is a core belief that predates high school.

“My brothers are athletes and my parents were athletes so I was just taught to do that,” said Baran, who lives in Chicago. “I don’t want to make myself the showboat-y type person. I don’t want to be front and center. It’s a team sport and I want to include my team. I wouldn’t be where I am today without my coaches or my teammates. Growing up I was taught it’s not all about you. That’s in my brain. It’s not all about myself.”

That’s why in addition to being the top scorer, Baran leads the Blazers in assists with six.

“Wherever the ball comes from, I just try to move it around and get it off my feet quickly,” she said. “If the ball comes to me and I have a shot I’ll take a quick shot. But I like to distribute too. I don’t have to be the one scoring all the goals.”

With Claire Hasley as the only senior on the field, Baran has also been involved as a team leader for the Blazers (10-6-1).

“We all chip in,” Baran said. “We all have our times that we need to step up and say something. It’s just the team working together. [Leadership] is a team project.”