Guerin’s leading scorer this season with 21 of the team’s 37 goals, Mary Jo Toohey has the school record with 86 career goals 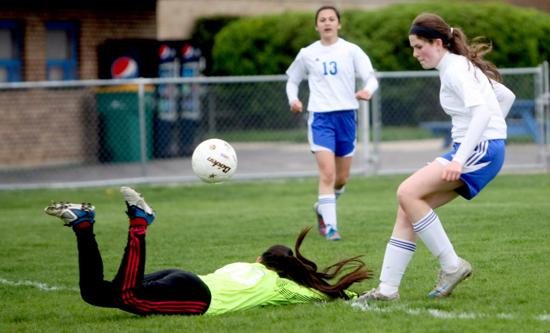 RIVER GROVE — With her high school soccer career winding down, Guerin senior Mary Jo Toohey saved her best game for when her team needed it most. She scored seven goals May 14 in a 10-1 victory over Chicago Phoenix in a Class 1A Guerin Regional semifinal.

“It’s pretty exciting,” Toohey said. “It’s something I always wanted to do but I was never sure I’d be able to accomplish it. I’m really happy that I was able to pull it off.”

In addition to scoring from passes from the midfield and creating her own breakaways, she put in three goals off of rebounds. Phoenix goalie Marili Gonzalez blocked the initial shots, but couldn’t grab the ball and Toohey followed up.

“I always try to crash the net because you never know,” Toohey said. “The goalie can bobble the ball a few times, you can always get that second-chance shot.”

Guerin’s leading scorer this season with 21 of the team’s 37 goals, Toohey has the school record with 86 career goals. Midfielders Alondra Rodriguez and Victoria Calderon set her up.

“They know [Toohey] can finish, so she hangs up front,” Guerin coach Anthony Donato said. “They do the work, get it to her, and she does her part.”

Guerin’s season ended two days later in a 2-1 loss Noble Street Charter in Friday’s regional title game. Toohey had a defender draped on her the whole game and she was held scoreless. The loss was a high school career-ender, but she was glad she had the big game before it was over.

“It was kind of a nice way to end my career in high school, breaking a record and all of that,” she said. “It made the Friday loss not so difficult, so that was good.”

Toohey is graduating fourth in her class and plans to attend Auburn next year and study food science.

In 2015, Guerin will look for the return of Rodriguez and Calderon for their senior seasons. Toohey said that those two and a talented incoming freshmen class will keep Guerin competitive.

Still, Toohey will be tough to replace.

“I think we’re going to miss her a lot,” Rodriguez said. “She’s a really big part of the team.”