Taft scored seven unanswered runs, including the walkoff game-winner drove in by Joe McFeely, to take down Kenwood 7-6 in Friday's Public League semifinals at Wrigley Field. 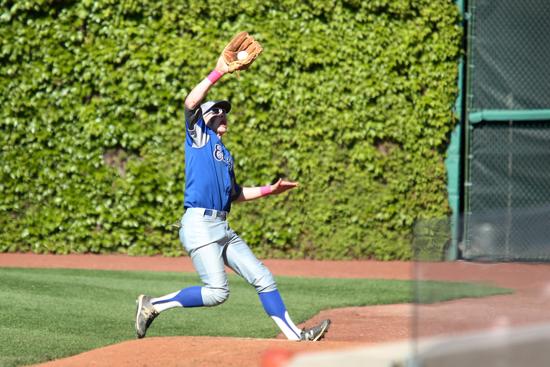 With a berth in the city championship on the line, Taft had a dubious start Friday.

Before Joe McFeely and his teammates could even step to the plate, Taft was already trailing by six runs.

Quiet at first, no heads were dropped. The Eagles just had their work cut out for them.

“Down 6-0, we’re trying to focus on having good at-bats and battling our way back into it,” McFeely said. “One run at a time.”

Walk by walk, hit by hit and run by run.

Taft put together an improbable comeback, scoring seven unanswered to pull off a 7-6 victory over Kenwood with McFeely knocking in the game-winning run in the bottom of the seventh in Friday's semifinals at Wrigley Field.

“I’ve never had a game-winner, not one,” McFeely said. “First one ever, and it feels good. It was a good at-bat, and I’m looking for anything.”

Two outs and the bases loaded, McFeely, a junior outfielder, put a charge into the pitch, driving the ball to deep left to bring Elias DeJesus home from third for the game-winning run.

Taft coach Rich Pildes said it is just the program’s second appearance in the city title game in his 30 years in the dugout.

“Player by player, you wouldn’t think we were 26-4,” Pildes said with a laugh. “We’re not the most gifted offensive team so we’ve got to scramble and take advantage with what they give us.”

The Eagles took that message to heart in the semifinal, drawing 11 walks.

Sophomore Fred Fitte was a hero in relief, allowing two runs over 6 1/3 innings with three strikeouts to earn the win.

“We have a great team and great defense so I’m just throwing strikes,” Fitte said. “We kept coming back, and it was a great game. We kept battling.”

Taft scored four runs in the second and two in the sixth with an RBI each from Eli Mercado and Jack Suwinski to set up McFeely’s walkoff heroics.

“A walk can be a hit, ‘Base hit, ball four,’ we call it,” McFeely said. “Any way you can get on base, and we have confidence in our lineup.”

Matt Francesconi had three RBI for Kenwood (14-12) with Rafael Hinojosa adding another.