Aurora Central’s Karina Liz had the fastest qualifying time in the 800-meter run, while Kaneland had eight qualifiers, including three relays, and Rosary four finalists in Friday's Class 2A state preliminaries. 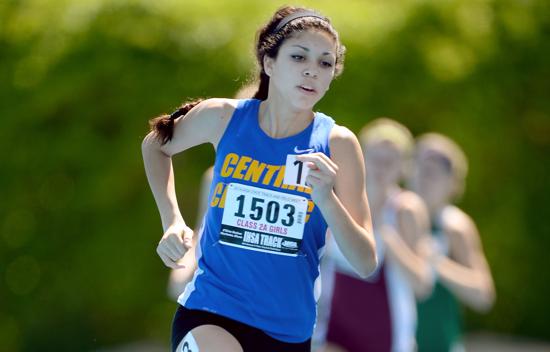 Aurora Central sophomore Karina Liz is the favorite, Kaneland is in the hunt for a team trophy and Rosary is breaking new ground.

“I wanted to make a statement,” Liz said on a bright sunny morning in which she posted the fastest qualifying time for Saturday’s finals of the 800-meter run.

Running in the third heat, Liz had the 2:15.28 of heat 1 winner Zoe Mead of Princeton to shoot for when she started. Mead had cut nearly five seconds off the time she ran at sectional the week before in losing to Liz by seven seconds.

The Charger took the early lead in her race and widened the gap to 15 meters entering the second lap and kept pulling away, finishing in 2:12.66, which is only .23 of a second off the personal best she ran last summer in taking second in a national meet.

The Knights, led by freshman sprinter Nicole Sreenan, will have eight finalists competing Saturday, tied with Normal University and Springfield behind team title frontrunner Cahokia, which has 10 finalists.

Kaneland qualified four individuals for the finals: Sreenan in both the 400 and 100, Christina Delach in the pole vault and Maddie Keifer in the high jump.

Sreenan had a runner in the next lane take a fall coming off the final curve in the 400 but she maintained her focus and won the heat in 56.44 seconds, a 1.1-second improvement from sectional.

“There’s nothing you can do about it, that’s the second time it’s happened to me,” Sreenan said. “It happened with (teammate) Lauren (Zick) at conference and I wanted to stop and help her. You just have to stay focused.”

Sreenan also ran legs on the Knights’ 400 and 1,600 relays that qualified with times of 49.13 and 4:02.26. Zick bounced back from the high ankle sprain she suffered in that fall at conference to run the anchor leg of the qualifying 400 and will have one more race.

Rosary suffered a setback when Sydney Zaragoza aggravated a hamstring injury in the 800 relay that did not advance. She was able to finish her leg of the relay but was on crutches and unavailable for the 1,600.

Sophomore Shea Vero was pressed into duty and “did an awesome job,” coach Vic Mead said.

Vero, who had run that relay just once during the season, joined Emily Bakala, Molly Stefanski and Abby Hammer in setting a school record 4:02.48 that qualified for the ninth and last spot in the finals.

“A sure case of what adrenaline will do for you,” Mead said, noting that it was the first time a Royals’ 1,600 relay has reached the final at state. The same is true for his 3,200 relay of Bakala, Vero, Emily Martin and Madison Ronzone, which qualified in 9:39.85.

Ronzone came back to qualify in the 1,600 with a 14-second improvement off sectional with her time of 5:07.87. Sarah Nyaeme turned in a personal best 36-00 in the triple to advance to the final and give the Royals four finalists.