Stacey Smith won the long jump and qualified in the triple jump to help Schaumburg earn its first sectional title in 31 years at Bartlett on Friday. 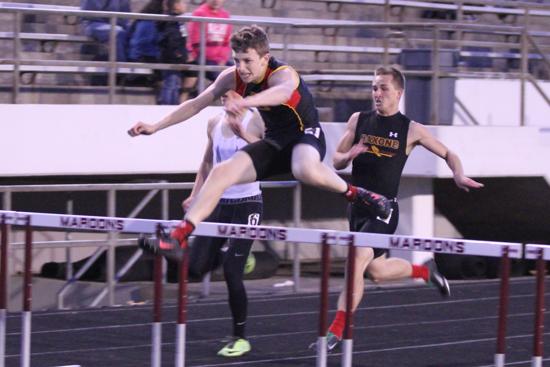 Schaumburg coach Ryan Senica wasn’t exactly sure if or when the Saxons’ boys track program had won a sectional championship.

In fact, per the IHSA website, Schaumburg last won a team sectional title in 1983, which means the Saxons broke a 31-year drought by winning Friday’s Class 3A Bartlett Sectional.

“I’m proud of them,” Senica said. “What Stacey Smith did in the triple jump kind of sums up our season. His season was on the line and he rose to the challenge, and that’s what they’ve all done for most of the year.”

Smith needed his final jump to qualify for state and finish at the head of the pack with a jump of 45 feet, 5 inches. Smith also finished first in the long jump to advance.

For pure, unbridled joy it was hard to beat the way Batavia’s Peyton Piron felt after winning the 300 hurdles in 39.79, qualifying for his first time.

“I remember being in fifth grade and being amazed at these guys making it downstate, and now I’m one of them,” Piron said. “It’s unbelievable. I’m so blessed to be one of them.”

Six runners qualified in the 800, led by Geneva’s Blaine Bartel, who posted a personal record of 1:54.72.

“At about the 500 to go mark, I thought ‘I’m going to go for it,’” Bartel said. “It was a now or never kind of thing. I just turned it loose and opened my stride up. It feels great.”

Schaumburg’s Shandall Thomas won the 100 final in 10.80 to advance for his second consecutive year and he’s ready to do more than just compete this year.

“As a sophomore I happy to get there,” Thomas said. “I’m a junior now and I want to place or win it. When I’m a senior, nothing but winning it will be good enough.”

Bartlett’s Dan Cotton also recorded a PR and set a new school record when he finished the 3,200 in 9:23.92 to return Downstate for a second consecutive year.

“It felt more like a job this season than it did last year,” Cotton said. “There was more pressure on me but I knew what I had to do. I came here with a mission and I accomplished it. I’m ready for next week.”