The first day of a boys tennis sectional is about qualifying for state. The second is about finishing. 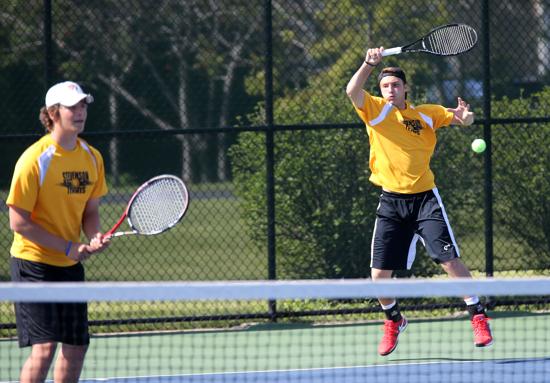 LINCOLNSHIRE — The first day of a boys tennis sectional is about qualifying for state. The second is about finishing. No one finished better than Stevenson did at its home sectional Saturday.

Playing on their home courts at the Vernon Hills Athletic Complex, the Patriots won the team competition to earn a berth in the state tournament. Stevenson’s No. 1 doubles team of senior Andrew Komarov and junior Colin Harvey won its third consecutive sectional title, defeating teammates Adam Maryniuk and Matt Harvey 6-0, 6-2 in the championship match. Sophomore

The top four singles players and doubles teams from each sectional advance to the state tournament, scheduled for next Thursday, Friday and Saturday at Hersey. Stevenson will have two doubles teams (Komarov/Harvey and Maryniuk/Harvey) and one singles player (Bush) competing. Freshman singles player Brian Weisberg was the only Patriot not to qualify.

“Our goal was to get everybody down. But it’s still a team sport and we’re excited,” coach Tom Stanhope said. “You work all season to get this opportunity.”

Singles play mirrored doubles in that teammates squared off in the sectional title match. No. 1 seed Ben VanDixhorn defeated fellow Wildcat Stefano Tsorotiotis 6-1, 4-6, 6-1. VanDixhorn was dominant over the two days, dropping one set. He heads into the state tournament confident he can stay in the championship bracket through the weekend.

“I feel like I played solid. I returned and served really well,” VanDixhorn said. “The last two weekends have been good for me as it’s gotten me more mentally tough. I’m ready for state.”