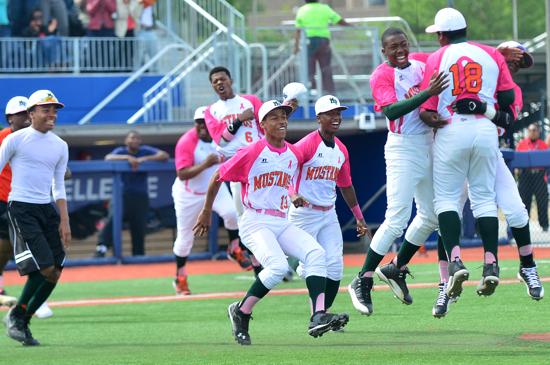 It isn’t every day a preps program gets a shot at history.

So Saturday at Curtis Granderson Stadium on UIC’s campus, Morgan Park’s Lavar Reed, James Davison and the Mustangs enjoyed the outcome of their Public League final against Taft.

The Mustangs earned a 9-5 victory to claim the program’s first Public League title.

“It really means a lot to us because it shows we came together as a whole,” Reed said. “After last year’s second-place finish, we felt that need to come together and do what we had to do.”

With the Mustangs opening play this week in the Class 3A playoffs, Davison hopes his teammates will be celebrating again over the coming weeks. For now, they will settle for the city title.

“It means everything to put a baseball banner up in Morgan Park,” Davison said. “We see basketball, football, track, everything, and it just feels good to make history, to be the first to do something.”

The make-or-break moment for Morgan Park (19-7-1) came in the fifth inning after Taft tied the game at 4-4 with a four-run frame.

The Mustangs wasted no time responding, scoring four runs in their half of the inning. Reed led off with a single and came around to score on a Christian Bullock two-run single.

Joshua Shaw added an RBI triple and eventually scored on a wild pitch as Morgan Park reclaimed the lead at 8-4.

“Quiet minds and positive thoughts,” Reed said of the inning. “We knew we were going to get the runs back. We just had to pick each other up.”

“I’m just trying to get on base and do the little things,” Davison said. “I try to use my legs to be great. I bust my butt, stealing bases, whatever I can.”

Reed (two runs) and Elijah McKinnis each had an RBI for Morgan Park, which lost in the city title game last year to Simeon.

“Last year we wanted to be in the championship, but this year, we wanted to win it,” Morgan Park coach Ernest Radcliffe said. “It’s trusting in our whole program, and that’s how we pulled it off.”