Ryan Preacely leads Johnson to historic finish in 2A finals

Ryan Preacely won two individual events, setting a meet record in the 100 meters, and anchored a first-place relay to help Johnson earn its first state trophy in any sport Saturday at O’Brien Stadium. The Pumas finished third, behind Cahokia and and Normal U-High. 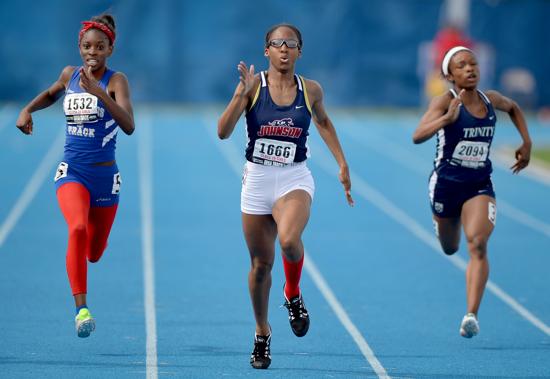 CHARLESTON, Ill. — Four years ago, the Johnson campus of the Noble Street network opened in Englewood and welcomed a freshman class that included an aspiring runner named Ryan Preacely.

She picked the school for its academics, enrolling without knowing whether it would have a track team. Thanks to Preacely, the Pumas have a pretty good one now.

wit
The Pumas finished third in Class 2A with 38 points, behind Cahokia (61) and Normal U-High (54). In Class 1A, Aurora Christian won its first girls track state title, 49-45 over Tremont.

Preacely’s big day featured her last high school races against fellow South Sider Ebony McClendon of Brooks, who was runner-up in both sprints.

“I’m really proud of Ryan,” said McClendon, a Wisconsin recruit. “And I still have summer and college track. I think that’s why I’m not as mad still. Because I did cry really bad after the [100].

“We dominated the sprints today, so I’m proud.”

Preacely’s day started with a win by the 400 relay team that also included Mercedes Binns, Brittany McLaurin and Alexus McDonald. They finished in 48.05 seconds.

A little later, she won the 100 in 11.68, beating the year-old record of Springfield Southeast’s Charday Crawford by .04.

“That was the shocker to me,” Preacely said of the time. “I was like, ‘Wait, what?’ That’s the fastest time I’ve ever run in my life.”

A little visualization helped. “Coach [Jonathan Watson] actually wanted me to think like an animal,” Preacely said. “I had to get that adrenaline going in my heart.”

But Preacely came back to end her prep career with one last win in the 200 (24.34), five-hundredths of a second ahead of McClendon.

“I don’t think it was as strong as my 100,” Preacely said. “But I used enough power to go out of the blocks ... strong and not be iffy with it as I sometimes am. I have my on days and off days with the blocks.”

Saturday was an on day. “Everything just seemed to go right for us today,” Watson said. “Definitely as a coach, it’s a once-in-a-lifetime experience for everything to come together like this.”

Ogden junior Nichyria Byrd, who didn’t even start triple-jumping till this outdoor season, won the 1A title in the event at 38 feet, 3.5 inches.

Reed-Custer pole vaulter Morgan Zacharias set a 1A record with a 12-10 clear and Natasha Brown’s win in the 200 (25.37) helped put Aurora Christian over the top.

Brown, a junior, considered not running this season to focus on academics. “When Natasha came out for the 200, everyone was praying for her and she ran a great time and finished strong,” said Eagles coach Anna McQuade, who was a freshman on Aurora Christian’s first team in 2005. “As soon as she crossed the line, we were good.”