Isabelle Scott twice was in the right place at the right time for a pair of goals in Lyons' 3-0 victory over Downers Grove South in the 3A Lyons Regional final. 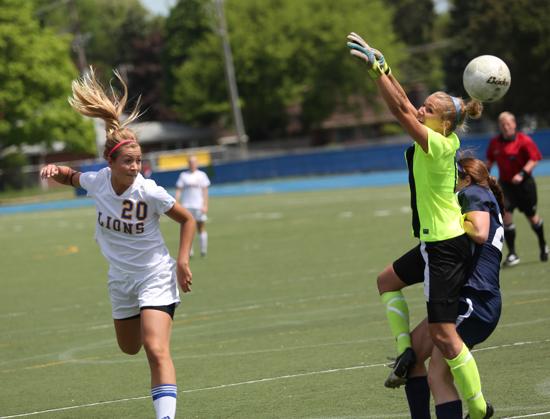 WESTERN SPRINGS — Lyons sophomore Isabelle Scott did not have a goal  through 18 regular-season and one playoff game.

On Saturday, Scott twice was in the right place at the right time for a pair of goals in Lyons' 3-0 victory over Downers Grove South in the 3A Lyons Regional final.

Senior Emily Lange scored the first goal before Scott's two goals propelled top-seeded Lyons (17-3) to its 11th regional title in 12 years. Lyons is set to meet York in the Downers South Sectional semfinal at 5 p.m. Tuesday. Lyons beat York 1-0 in the third game of the season.

Lyons took advantage of its corner-kick opportunities against ninth-seeded Downers South (9-11-3), which put only one shot on goal in the first half.

All three Lyons goals came in the first half, including the first two off corner kicks by Grace Nasenbenny.

"At the beginning of the season we were working on them, but in games they started clicking," Scott said. "Everyone is aggressive in the box."

Lange's header off the corner started the scoring with 9 minutes, 49 seconds to go in the first half.

"We're getting better [at goals off corners]," Lyons coach Bill Lanspeary said. "We have a lot of seniors. They are big, strong kids that make smart plays and smart reads on the ball."

In the first meeting of the season between the WSC Gold (DGS) and Silver (LT) champs, Mustangs coach Abby Anderson could see the difference.

"They were six inches taller than us," Anderson said. "Everything they got came off a set play. We couldn't grow six inches in the game [to defend]."