Completely healthy for the first time since her freshman season, Meghan Marias won the 100 meters and ran on two first-place relays as Lincoln-Way East successfully defended its title in dominant fashion with 72 points Saturday in the Class 3A state finals at O’Brien Stadium. 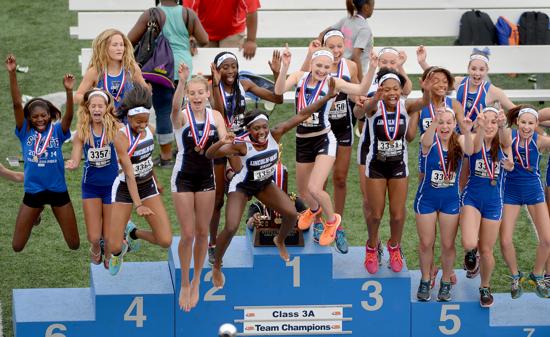 CHARLESTON, Ill. — Saturday was a day for coming back for Meghan Marias and Madeline Perez.

Completely healthy for the first time since her freshman season, Marias ended her prep career in memorable fashion in the Class 3A state finals at O’Brien Stadium. So did Perez, who spent much of her senior year on the sidelines before coming back to earn one more distance win.

Marias won the 100 meters and ran on two first-place relays as Lincoln-Way East successfully defended its title in dominant fashion with 72 points. Emma Spagnola swept the hurdles to lead West Aurora (39) to a runner-up finish and its first state trophy, while St. Charles East (38) took third.

Marias ran on a relay that won a state medal as a freshman, but missed her entire sophomore season recovering from back surgery. Another injury limited her to relay duty again last spring, but this year was different.

“One year ago, I never thought I’d be here right now,” said Marias, who’s headed to Michigan. “But I decided to myself six to eight months ago, ‘I’m just going to go for it. I’m going to work as hard as I can in the winter to get recruited.’”

Her college future secured, she could relax and enjoy what has been a memorable ride. It included a win in the 100 — “my favorite event” — in 11.87 seconds and legs on the 400 relay (with Asia Brown, Ololade Ayoola and Alexis Hyshaw) and 800 relay (with Alexis Pierre-Antoine, Brown and Sydney Barrera). The former set a meet record of 46.04 and the second ran 1:39.71. Marias also was fifth in the 200.

“Everyone has basically done what they were expected to do, under pressure,” Marias said. “There was a lot of pressure, [from] last year being state champs.”

Perez can relate to that, having won a state cross country title and the 1,600 and 3,200 in track as a junior. This school year, she has barely a handful of races because of injuries.

“This senior year definitely hasn’t gone as I’d hoped,” she said. “Unfortunately with this sport, injuries come up and I guess I learned that. It wasn’t fun, but I think in the long run it taught me a lot about myself.”

In the 100s, Spagnola edged Homewood-Flossmoor’s Jayla Stewart, who ended her winning streak in the event earlier this spring. “I wanted her to push me,” Spagnola said. “I wanted to run a good time, which didn’t really happen. But I won.”