Joe Henricksen list five players from the Class of 2015 that have had their recruiting stock rise in the offseason. 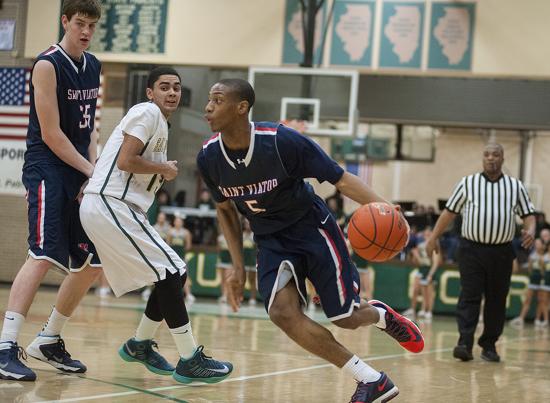 When dealing with something as unpredictable as teen basketball talent, it’s never easy to forecast just who will raise their stock or when they’ll do it. After all, past performance –– good or bad –– is never a guarantee of future results.

The club circuit in the months of April and May is one opportune time to step forward, play some high-level basketball and grab some people’s attention. A busy spring season of AAU play is in the books and stocks have been raised.

Here are five players –– a few you’ve heard of and two others you probably haven’t –– who raised their stock and profile the most since the end of the high school season in March.

The list starts with the biggest no-namer on it. After seeing his role expand over the course of the season for a 22-win Lake Forest team this past winter, the 6-3 Karras is now emerging into an eye-opening weapon with Division I potential. A terrific three-point shooter with a quick release and length on the perimeter, Karras’ game continues to evolve and gain confidence. While his stock will continue to rise, Karras is one of the best-kept secrets in the Class of 2015.

Despite being the biggest name on the list –– and one who plays for the highest profile high school team in the state and on the EYBL circuit with the Mac Irvin Fire –– Morrow still managed to raise his stock. There were questions six months ago in regard to the 6-6 undersized 4-man as a college prospect, but his lunch-bucket mentality, toughness and productivity has solidified himself as a high-major prospect with several offers and heavy interest at that level.

Among the City/Suburban Hoops Report’s top 15 prospects in the Class of 2015, the big-bodied wing with massive strength is now finally starting to grab the attention of college coaches. Wisconsin-Green Bay and UW-Milwaukee have offered. He visited Valpo unofficially and he’s now on the radar of a surplus of schools. Schofield gets to the basket and can knock down shots from beyond the arc.

He’s received plenty of notoriety throughout his high school career, but the 6-2 guard put together a terrific spring while playing with the Illinois Wolves. Smart led the Wolves to a ton of spring success, including a Spiece Run-N-Slam title in early May. He shot over 50 percent from beyond the three-point line, averaging over 15 points a game. Creighton, Loyola and Wright State have all offered, with interest from a bevy of schools, including Wake Forest, Western Kentucky, Nevada, St. John’s, Drake, Rutgers, Saint Louis and Georgia Tech.

Another little-known prospect in the Class of 2015 but one that has and will continue to grab more and more attention while playing with Fundamental U on the AAU circuit in July. Quinn is huge, a legit 6-10, 230-pound center who moves pretty well. Although very raw offensively and still in the process of catching up to the speed of the game –– he’s only played basketball for three years –– Quinn has come a long way and sports offers from LaSalle and Fairfield.