Waukegan gets past Grant, advances to regional semis

Waukegan hadn’t won a match in regional play since 2008, but advanced to the semifinals with a 25-19, 26-24 win over Grant and will play Warren on Tuesday. 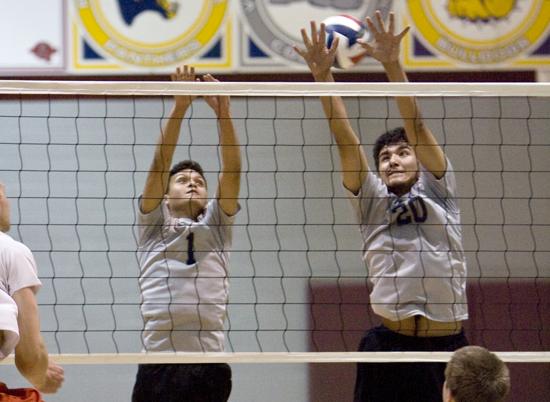 With Jose Villegas serving, Waukegan made a 9-0 run to take an 18-9 lead in Game 1. The Bulldogs led 21-12 when Grant rallied back to 21-19 with Brock Lundman serving. A kill by Andres Garcia ended the Grant run, and Waukegan scored the next three points on Grant errors to win the game 25-19. In Game 2, it was Grant’s turn to build leads of 13-4 and 18-9, but the Bulldogs' 12-2 run got it back into the game. Josh Tico and Ricardo Guzman had key serving streaks in the rally. The teams traded points to 24-24, then Grant was then called for a midline violation, and a block by Garcia and John Harrington ended the match.

The regionals this year were seeded geographically rather than by skill level. On Tuesday, the Bulldogs will face Warren, which was the top seed in the six-team bracket. Zion-Benton is the No. 2 seed and will play Lakes on Tuesday night in the other semifinal.

“Our libero quit last week because he took a job, so I had to bring up a sophomore, Josh Tico. He did a great job today. He’s been playing JV all season, but we practice together. We learned that a long time ago. At Waukegan, you always practice JV and varsity together, and you order JV and varsity uniforms, because we wind up having to do a lot of flip-flopping during the year.” — Waukegan coach Rachel Wiatrowski

“I’m happy they came back in the second game from nine down. That’s almost crazy. This year’s team has never quit. They have a lot of fight in them. Our setter [Jose Villegas] came in with a goal. He wanted to win, and he set the pace for us in the first game. Then, our little libero helped us win that second game, because he served balls in when we needed him to.” — Wiatrowski

“I can’t believe we actually won. We made it hard on ourselves in that second game. That was a long way to come back, but we did it.” — Waukegan hitter Teddy Coleman

“Each of the last years, we’ve gotten better, not only how we play on the court, but our record is getting better also. There is definitely progress, but we play in a tough area, in a very good conference. It gives them a chance to see what high quality volleyball looks like, and hopefully, if we can get them to play some more during the offseason, that should help when the season rolls around.” — Grant coach Jon Schaap