During the summer before his junior year, Hickey decided to put more effort into his strength and conditioning, hoping it would increase his pitch velocity. It's paid off handsomely. In 64 1/3 innings this season, he has 127 strikeouts, breaking the school record of 121. 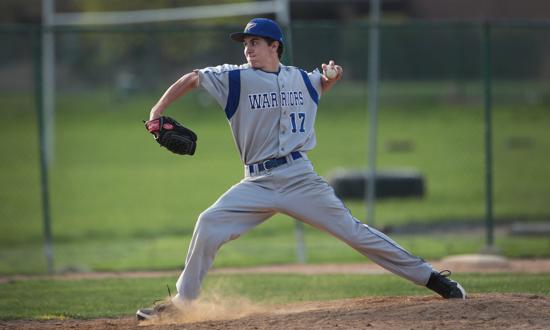 “Brandon is a kid who has put in the time and worked to make himself better,” Crete-Monee coach Gene Cahan said. | Allen Cunningham/For Sun-Times Media

As a kid, Brandon Hickey didn’t have an overpowering fastball.

The lack of velocity, however, forced him to learn how to pitch. To be able to get hitters out, he had to concentrate on locating his pitches and changing speeds.

“I was always able to keep hitters off balance,” said Hickey, a senior at Crete-Monee. “When you don’t throw fast, that’s what you have to do.”

During the summer before his junior year, Hickey decided to put more effort into his strength and conditioning, hoping it would increase his pitch velocity.

The left-hander saw his fastball rise into the mid-80s (mph). Combine the additional heat on his fastball with a wicked off-speed arsenal and Hickey transformed himself in a power pitcher.

In 64 1/3 innings this season, he has 127 strikeouts, breaking the school record of 121 held by Todd Smiser (a 1989 grad). Hickey has allowed just 40 hits and 27 walks to go along with a 6-3 record. His ability to locate his pitches at any point in the count, primarily a curveball that has exceptional late movement, is key to his success.

“It’s nothing that I planned or thought I’d do,” Hickey said. “Records are made to be broken, but it’s great to say I’ve broken a record.”

“Brandon is a kid who has put in the time and worked to make himself better,” Cahan said. “He has talent — a lot of athletes do — but most do not work as hard as he does to bring out the best.”

Hickey and Crete-Monee have been at their best most of the season. With their ace leading the charge, the Warriors captured the Southland Conference championship.

“To win the Southland is a big deal,” he said. “It’s a great feeling.”

Hickey not only is a leader on the field, but off it as well. He’s a member of Crete-Monee’s Ignition Leadership Program, which, along with providing community service, helps incoming freshmen get acclimated to high school.

“The satisfaction of helping people and watching freshmen grow is something I enjoy,” Hickey said. “We also raise money for veterans and hospitals. I think it’s important to give back.”

The Warriors won their 20th game of the season Monday, topping T.F. North 14-5 in a Class 4A Lincoln-Way Central Regional play-in game.

Now comes arguably the toughest test of the season: a date Wednesday with perennial powerhouse Sandburg in a semifinal. The 5-9 Hickey will be on the mound.

“I’m really looking forward to the challenge,” Hickey said. “I don’t want this season to end.”

Once it does end, Hickey will move on to Robert Morris. He plans a double major, in analytical business and sports management. He also intends to be key force on Robert Morris’ pitching staff.

“I felt comfortable around the coaches and I like the atmosphere,” Hickey said of Robert Morris. “It’s a very good school. I have confidence in myself that it’s going to be a great experience.”