Jake Barrutia's approach of playing in less club games during the offseason has paid off for Bartlett. The left-handed hitting outfielder/first baseman is batting .479 heading into the Class 4A state playoffs. 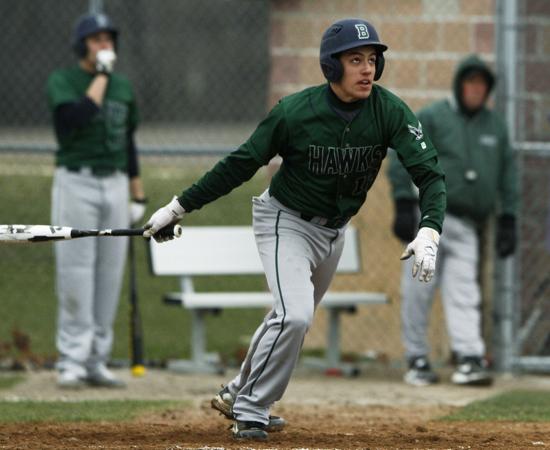 “Something happened with the travel team I was on a few years ago and so I actually didn’t play for anyone,” the Hawks’ left-handed hitting outfielder/first baseman said about last offseason. “I didn’t get a chance to try out for any team.

“I still worked on my swing a lot. I don’t know if it hurt me or anything.”

Perhaps less offseason games and more individual practice is the way to go after all.

Through the regular season, Barrutia led the Courier-News’ area with a .489 batting average. He had gone 46-for-94 before his numbers dipped a bit to .479 with an 0-for-2 day against Elgin in a 5-3 regional-opening win Monday that earned the Hawks a shot Wednesday at the Class 4A York Regional’s top seed, Batavia.

Barrutia credits not only his personal offseason swing work, but his ability to take the advice of Bartlett assistant coach Fred Vaniten in changing his approach and numbers.

“It’s in my stride,” he said. “I wanted to close out my stance a little and get a smaller stride. Last year I was always taking a big step and I had no balance. Coach Fred was big on that.

“He worked with me a lot about hitting opposite field a lot as well. So that’s been big. My spray chart this year is all over instead of just trying to hit to the right side.”

It took awhile for the changes and work to kick in, but as soon as the permafrost finally subsided this spring, his bat got hot. Barrutia was hitting .300 after 10 games. Over the next 18 games the mark steadily climbed. That included one stretch in May of eight consecutive hits.

“He was lighting the world on fire,” Hawks coach Chris Pemberton said. “I think our guys kind of built off his success at that point and that kind of got us moving toward some series wins here late in the season.”

The third batter in Bartlett’s order, Barrutia doesn’t challenge the fences. He’s a classic line-drive, gap hitter. He leads the Hawks with 23 RBI, but even without a home run and just nine extra-base hits, Barrutia has been so proficient with the bat that his slugging percentage is among the area’s best at .625.

“I’ve never put up huge power numbers,” he said. “I’m more a contact hitter. I’ve ever struck out a lot (12 of 110 plate appearances). It’s weird that without the power numbers my slugging percentage is up there but it’s always been what I’m about.”

Barrutia plans to try to walk on next year at the University of Illinois.

First, though, the Hawks hope to get into a sectional like they have the past two years. Considering Batavia has a 30-3-1 record and beat the Hawks 10-0 earlier this year, they know the semifinal game is key.

“We saw them when it was 35 (degrees),” Pemberton said. “We’re not quite sure what we’re going to see but do know they’re a quality team, very athletic.”

Bartlett (13-16) started the season hitting poorly, but like Barrutia, has gradually improved and led to winning conference series over Metea Valley and Neuqua Valley. Batavia is the next hurdle.

“The first time we played them we were struggling,” Barrutia said. “They have a good team. We’ll have to go in and play small ball against them like against Neuqua and Metea.”