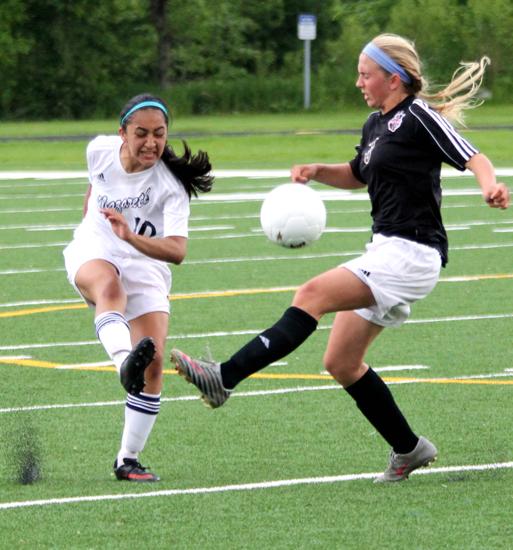 Nazareth's Brianna Tovar gets a kick off before Wheaton Academy's Rebecca Smith can stop her in the Roadrunners' 2-1 win on Tuesday. | Rob Valentin/For Sun-Times Media

Nazareth's Claire Ramsey didn't show any freshman jitters on Tuesday night against Wheaton Academy. The Roadrunners' leading scorer buried her biggest goal of the season, a game-winner with 2 minutes, 34 seconds to play, to push Nazareth to a 2-1 victory in the Class 2A Wheaton St. Francis Sectional semifinals.

The Warriors struck first with a goal by freshman Gretchen Pearson in the first minute of the game. The Roadrunners responded with Ramsey's first goal, coming at 20:15 of the first half. That's how the game would remain until Nazareth's Kelly Renehan played a ball from the corner to Ramsey at the top of the box. Ramsey used her right foot to send it to the top right side of the net.

On her biggest stage of the season, Ramsey was as clutch as it gets with a pair of goals.

Nazareth (13-7-2), with just three seniors advanced to the sectional final with the victory over Wheaton Academy (12-12-1).

"In the past we've gone to overtime games and they've never ended well. They're always pretty nerve-wracking. I knew we had to get it in the last five minutes so when Kelly played that great ball back to me, I just knew it was going in." — Ramsey