Kaneland set for showdown with downstate Cahokia in 2A final

The biggest obstacle standing in the way of Kaneland bringing home the Class 2A state track and field title on Saturday will be three-time defending champion Cahokia. 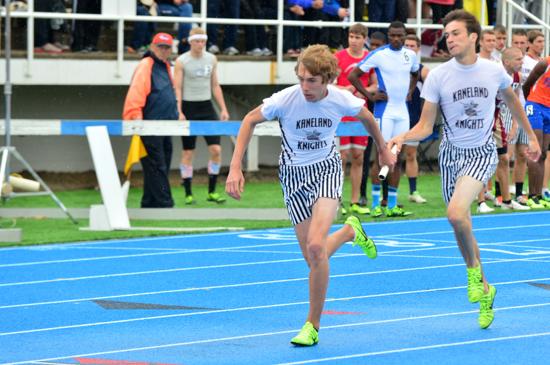 Kyle Carter (left) has a chance to medal for Kaneland in the Class 2A 400 on Saturday. | Patrick Gleason/For Sun-Times Media

There is one paramount question when Class 2A state powers Cahokia and Kaneland collide this weekend for supremacy at the boys track and field finals in Charleston.

Can the Knights knock off the three-time defending champions from the southern reaches of the state?

“From what all the coaches I have talked to around here have said, they think Cahokia is going to walk through the state meet,” St. Charles North coach Kevin Harrington said. “But I have seen Kaneland do some crazy things on the track this year. It’s going to come down to whose strengths outweigh the other.”

“The meet has the makings for something very special between our two teams,” Kaneland coach Eric Baron said.

Kaneland —sixth last year in Class 2A — advanced 15 individuals and three relays to the state finals at Eastern Illinois University.

The preliminaries in the middle tier begin Friday morning in both the field and on the track.

In order for Kaneland to realize its state-championship potential, the Knights will undoubtedly have to double score in certain events.

The Knights have a commanding five-second lead top seed in the 3,200 relay.

The traditional last event — the 1,600 relay — could be quite dramatic as Cahokia and Kaneland are the top seeds, separated by a mere three-hundredths of a second.

Plano and Sandwich also have grand designs in Class 2A this weekend.

Plano also has two of the top triple jumpers in Jon McDermott and Shawn Wollenweber, who will also compete in the long jump.

“I feel like the triple jump is our best chance to medal,” Plano coach Brad Kunz said. “(Their qualify jumps) were their first jumps. They decided to rest their legs (for track events).”

Sandwich will lean heavily on its sprint relays as senior standout Austin Bruenig anchors the 400 and 800 quartets with assistance from Alex Lidinsky, Kody Randa and Marc Lidinsky.

“Our kids have been pretty consistent this season,” Sandwich coach Andy Heilemeir said. “Obviously, our goal is to place and bring home some medals.”

In Class 3A, Geneva seniors Blaine Bartell and Tim Roels had eye-opening times at the Bartlett Sectional last week.

“It was about a two-second PR,” Bartell said of his third-seeded time in the 800. “It was now or never. I am going to run just like I did last Friday (at state).”

“If I can make it to Saturday, that’s kind of the goal for all of us,” said Roels, who defended his championship at 200 meters. “It’s really what we’re trying to focus on.”