Lane's Pavlo Hutsalyuk will attempt to win the 800 and 3,200 relay at the Class 3A state finals, but Hutsalyuk has another preoccupation: the turmoil in Ukraine, where he was born and lived till moving to the United States before fourth grade. 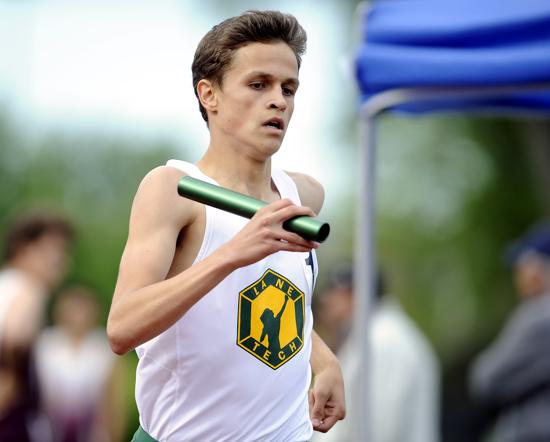 The biggest races of Pavlo Hutsalyuk's career will be coming up this weekend, but that's not his only focus.

The Lane senior is one of the state's top metric half-milers, qualifying both in the 800 meters and as a member of the Indians' 3,200 relay team.

That latter event holds special meaning at Lane, which won it two years ago at the Class 3A finals in Charleston. No Public League team had won state in the 3,200 relay before, and Lane hadn't won gold in any relay since 1974.

The Indians qualified for state again last season but didn't make the final. So redemption is on the Indians' minds.

Hutsalyuk has another preoccupation: the turmoil in Ukraine. He was born there and lived there till moving to the United States before fourth grade.

"It's pretty scary," he said of the political upheaval in his homeland. "But fortunately, my family is on the west side [of the country]. We talk to them pretty often. Life is going on as normal; they're not affected by it."

That could change. Hutsalyuk, his parents and his sister were making arrangements to return to Ukraine for his sister's wedding this summer, but the unsettled situation on the ground could affect that.

In the meantime, Hutsalyuk keeps an eye on the news and looks at the big picture.

"Track is pretty important to me and I focus a lot on it," he said. "But there's more to life than track."

That said, this is a big weekend for him and his Lane teammates. Both are coming off sectional titles, Hutsalyuk running 1 minute, 55.95 seconds in the 800 and teaming with Jon Vara, Christian Badillo and David Schmieg to go 7:51.19 in the 3,200 relay last week at Concordia University.

He expects both of those times to come down in Friday's preliminaries at Eastern Illinois, and hopefully again in Saturday's finals.

The 2012 title "definitely inspired us to be like those guys," Hutsalyuk said, "because those guys showed us that anybody can do it if they put in the work."

That description fits Hutsalyuk, according to Lane coach Kris Roof.

"He has an extremely hard work ethic," Roof said. "It's evident in the classroom [too]. His hard work has given him the edge."

Indeed, Hutsalyuk, who knew hardly any English when he moved to the U.S. eight years ago, scored a 30 on his ACT and plans to major in business at a college to be determined.

On the track, Hutsalyuk seems to have found his groove, at least for high school. "When he came out as a freshman for track, he looked like a power runner," Roof said.

But the Lane coach sees his star stretching it out at college, maybe running the 1,500 or the steeplechase. This season, Hutsalyuk ran a 9:28 3,200 with no competition.

For now, though, the focus is on that relay.

"I think they're confident because their school did it two years ago," Roof said. "I think they're eager and hungry, especially after last year. Not making the finals was really hard on them. But they didn't mope. They started June off getting ready for cross country."

But then perspective comes easier for Hutsalyuk than most.