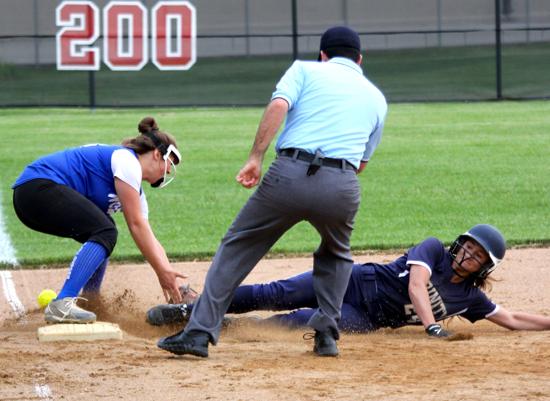 Trinity's Anyssa Iliopoulos slides safely into third base as the ball gets away from Maine East's Alyssa Matej. | Rob Valentin/For Sun-Times Media

The beat goes on for Trinity as the Blazers defeated Maine East 10-0 in five innings in the Class 4A Niles West Regional semifinals on Wednesday. Trinity advances to the regional championship game to face Young.

The first inning and a half were scoreless, but Trinity (21-12-1) broke things wide open in the bottom of the second inning, scoring eight runs. Five different players drove in runs and Maine East (7-19) simply couldn’t dig out of the hole.

Blazers' first baseman Allison Borawski had two big at-bats in the second inning. She led off with a double to center and later in the inning she belted a three-run homer over the fence in left-center.

Trinity starter Cortlyn Kelly and reliever Kassie Guerrero combined to earn the shutout. Kelly pitched three innings and allowed two hits, while striking out seven and walking none. Guerrero allowed two hits in two innings. She struck out one and issued no walks. Shortstop Mary Iliopoulos went 2-for-2 with a pair of singles for the Blue Demons.

“I was looking for a pitch up the middle. I usually pull the ball a lot so I was just worried about being patient and waiting for the ball. I didn’t think it went over at first. I just thought I hit a line drive but it felt pretty good coming off the bat. — Borawski, on her second-inning homer