When Batavia senior Laren Eustace slid home with the winning run on a wild pitch in the bottom of the 10th inning of Wednesday’s 5-4 Class 4A York Regional semifinal win over Bartlett, he tried to wrap his head around what transpired in the game. 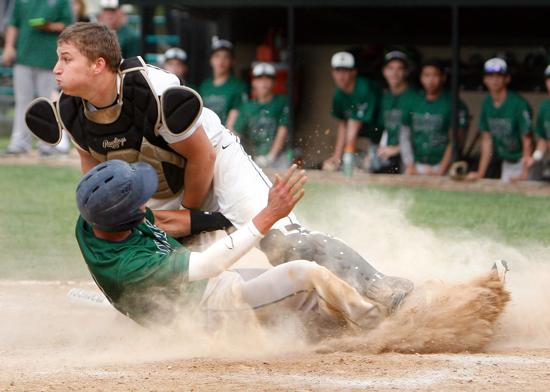 When Batavia senior Laren Eustace slid home with the winning run on a wild pitch in the bottom of the 10th inning of Wednesday’s 5-4 Class 4A York Regional semifinal win over Bartlett, he tried to wrap his head around what transpired in the game.

The Bulldogs spent a year stewing over last year’s opening-round exit to Hoffman Estates as the number two seed in the sectional. They are in the midst of one of the best seasons in program history this spring, but for 9 ½ innings, Bartlett (14-17) put the fear of a repeat performance of 2013 in the minds of the top-seeded Bulldogs (30-3-1) Wednesday.

“It’s such a range of emotions,” said Eustace, who hit a one-out double and advanced on a groundout in the 10th to set up the winning run. “On my seat, Micah (Coffey) with two strikes on him, and I’m like, ‘This could be the end of the season.’ He delivered in the clutch. Wow, that’s all I can say.”

In a game filled with huge moments, Eustace was referring to Coffey’s two-out, two-run double in the bottom of the eighth that kept the game alive after the Hawks took a 4-2 lead in the top half of the inning.

With Matt Puttin on third and Jeremy Schoessling on second, Coffey worked the count to 3-1 on Bartlett reliever Dave Van Dyke. He took a called strike to push the count full.

“Getting to a 3-2 count forces me to swing,” Coffey said. “It forces me to be aggressive and attack. I just had to protect the zone and trust that I had the preparation and I put the time in to make me ready for that moment.”

He hit a double that hugged the right-field line to keep Batavia’s season alive.
Bartlett nearly took the lead back in the top of the 10th, but Batavia left fielder Reagan McReynolds gunned down Bartlett’s Jordan Flint at the plate to end the inning and set up Eustace’s winning run.

Batavia appeared to be running away with things early on. Coffey delivered a two-run single in the first to open a 2-0 lead. The Bulldogs kept putting the pressure on Bartlett starter Joey Roberson, but didn’t score again until the eighth inning. They left nine runners on base in the first four innings and 13 on base total.

“He settled in and was real mature,” Bartlett coach Chris Pemberton said of his sophomore starter. “(Stranding runners) build the confidence in Roberson out there. He knew he could get guys out and they were making outs for him.”

With Batavia unable to add on, Bartlett hung around. The Hawks finally broke through in the top of the sixth with RBI singles from Jake Barrutia and Cal Fanselow to tie the game at 2-2.

When Bartlett took the lead in the eighth, visions of last year’s loss to Hoffman Estates started to creep in.

“I’m standing out here (the third-base coaching box) down 4-2 going, you have to be kidding me,” Batavia coach Matt Holm said. “I asked the kids to do one thing this year, and that’s compete, and they kept that thought in mind and they never gave up.”

Batavia will face the winner of Thursday’s game between Willowbrook and York in Saturday’s regional finals at 11 a.m. at York.