A four-run first inning and the pitching of Sean Leland spearheaded Sandburg to a 7-1 win over Crete-Monee. Lincoln-Way Central rallied for a 6-5 win over No. 11 T.F. South in the second regional semifinal contest. 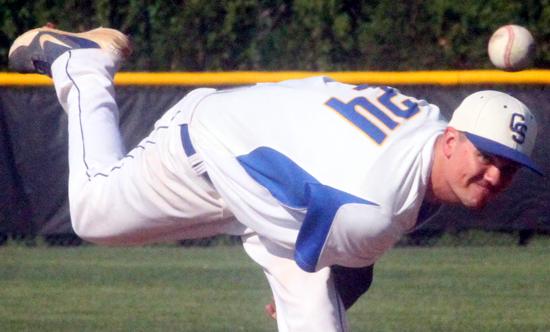 A four-run first inning and the pitching of Sean Leland spearheaded Sandburg to a 7-1 win over Crete-Monee in the first of two Class 4A Lincoln-Way Central Regional baseball semifinals Wednesday in New Lenox.

Sandburg sent nine players to the plate, scoring four runs on two hits, two errors, two walks, two wild pitches and a hit batter in the bottom of the first.

“Getting four runs in the first inning made everyone relax a little more,” Sandburg coach Jim Morsovillo said. “Their pitcher was a little wild. We didn’t sting the ball all over the field, but we took advantage of a few things for sure.”

“I tried to stay ahead in the count and they were swinging early,” Leland said. “They were on their heels because we put some runs on the board. My stuff felt good today and the guys made the plays behind me.”

“Our pitcher was a little wild and we didn’t back him up,” Crete-Monee coach Gene Cahan said.

Leland (7-2) carried a no-hitter into the seventh, settling for a two-hit, 10-strikeout performance. No. 13-seeded Crete-Monee finished the season 20-13.

“We never got anything going at the plate,” Cahan said. “That made it hard on us.”

“We were feeling loose and confident and they were behind,” Leland said.

“Sean’s been doing a phenomenal job and when his slider is on and the wind is blowing in, he’s going to be tough to beat,” Morsovillo said. “We knew we had a real good opportunity with him on the mound if we scored a couple of runs.”

Brandon Hickey’s double leading off the seventh ended the no-hit bid by Leland. Logan Kent’s RBI single broke the shutout. Leland struck out the next three batters for the complete-game victory.

In the nightcap, Lincoln-Way Central rallied from a 5-2 deficit heading into the bottom of the seventh.

Freshman Cam Post (double, single, three RBI) belted a one-out, two-run double to tie it at 5-5. Sophomore Alex Guerra’s fly ball to center was caught, but the throw got away from the catcher, allowing Sean Barry to score the game winner.

“That was big time by those guys putting the ball in play in pressure situations,” Lincoln-Way Central coach Scott Gardner said.

“It was a great opportunity, getting guys on, doing what we were supposed to do and we came up with a couple of big plays,” Post said.

T.F. South scored twice in the fifth and seventh innings to take a 5-2 lead into the bottom of the seventh.

Kevin Mampe was the winning pitcher for the Knights. Lincoln-Way Central was without star pitcher Brad Bass, a Notre Dame recruit, who was held out because of tendonitis.