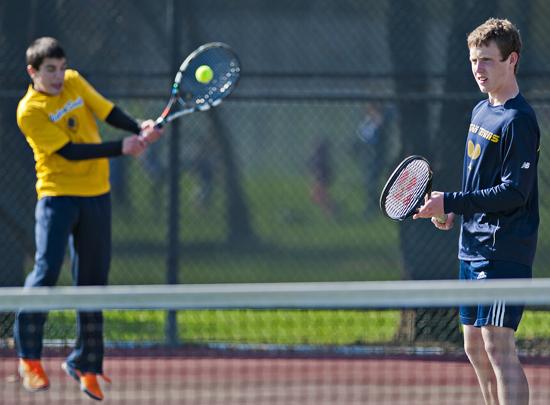 Glenbrook South’s Sebastien DesRoberts (right) and his doubles partner, Mike Baddeloo, are headed to state after taking third at the Glenbrook South Sectional on Saturday. | File

Glenbrook North’s David Shekman and Nick Marino will be competing in their first boys tennis state meet this weekend.

However, the doubles partners have taken somewhat different paths to the meet, which will take place today through Saturday at several locations around the Northwest suburbs.

Shekman is a senior who will cap off his solid career by playing in the showcase event. Marino, meanwhile, is a talented freshman who may be appearing in his first of many state meets.

“[Marino] is a good kid and knows everything that is going on, he learns quickly and has picked up a lot as the season has gone on. He came in as a talented guy,” Shekman said. “I never had a USTA ranking, I just built my game on strategy and learning the smaller parts of the game. I taught [Marino] little things that go into doubles and go into being part of a team, things you don’t get playing singles.”

The pair finished second in the Glenbrook South Sectional on Saturday, losing only in the title match (6-1, 6-1) to Glenbrook North’s other doubles team of juniors David Zakhodin and Miguel Perez. Zakhodin and Perez were the top seed.

Shekman and Marino, who were seeded No. 3, clinched their spot at state Friday with a 6-3, 6-0 second-round win over Fremd’s David Oh and Kiran Devaraj.

The Glenbrook North pair then upset the No. 2 seed, Glenbrook South’s Michael Baddeloo and Sebastien DesRoberts, 6-2, 6-4.

Shekman said reaching state is the result of hard work throughout his career.

“It feels pretty good. Four years of hard work all kind of came together [at the sectional]. It felt very rewarding,” said Shekman, who plans to attend Washington University in St. Louis but does not expect to play on the tennis team. “It was a little bit of a relief. I’m not going to any big school, and a loss [at the sectional] would have meant an end to major competitive tennis for me. It’s good to keep going.”

On the singles side, Glenbrook North’s other talented freshman, Mark Wu, captured the sectional title with a 3-6, 7-6 (4), 6-3 win over top-seeded Mac Galvin, a sophomore from Rolling Meadows. Was was the No. 2 seed.

Glenbrook North junior Will Sauser, the No. 4 seed, also qualified for state despite battling a strained abdominal muscle in recent weeks. Sauser, who will play at state for a third time, defeated third-seeded Eric Pohl from Fremd 6-2, 2-6, 6-4 in the third-place match. The top four singles players and doubles teams advanced to state.

Baddeloo and DesRoberts will be the Titans’ lone representatives at this weekend’s state meet after finishing third at the sectional. Baddeloo, a senior, and DesRoberts, a freshman, clinched the berth with a 6-3, 6-3 second-round win over Conant’s Glenn Huang and Kohei Ishii.

Baddeloo played doubles at state last season with then-senior Will Lyon. The pair went 4-2 and earned seven points in the team competition.

“[Baddeloo] has the experience from last year and Sebby is a good student of the game, a quick learner and a talented player,” Glenbrook South coach Larry Faulkner said.

Last season, he cruised through the first four rounds in the singles bracket before losing in the state quarterfinals. He ended up being eliminated in the consolation semifinals.

Though Galoustian wanted to play singles at state in his senior season, his body didn’t cooperate. A sore back has hindered Galoustian for the last month, affecting his serves. To get around that, coach Tad Eckert paired him up with junior Corey Schwartz.