One game away from being bounced out of a berth in the boys tennis state tournament, the Vernon Hills doubles team of David Dobrik and Nikita Lunkov had a brief conversation with their coach, Doug Gerber. 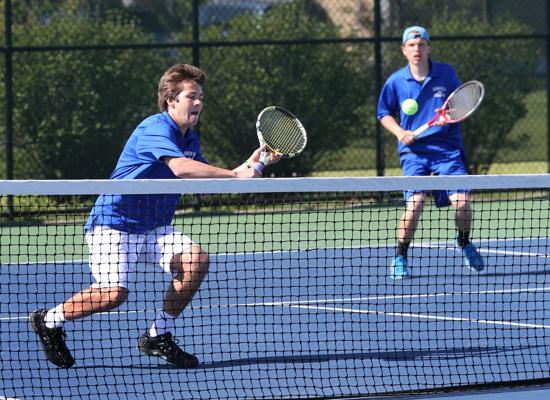 VERNON HILLS — One game away from being bounced out of a berth in the boys tennis state tournament, the Vernon Hills doubles team of David Dobrik and Nikita Lunkov had a brief conversation with their coach, Doug Gerber.

“He came up to us and said, ‘We’ve been through worse. Keep fighting, keep playing,’” Lunkov said.

That’s just what they did. Down 5-2 in the decisive third set to Barrington’s team of Matt Mulligan and Vijay Tripuraneni, the Cougars stormed back. Twice they broke serve to get to 5-5. On serve, Dobrik and Lunkov prevailed in one of the more entertaining games of the Stevenson Sectional tournament, featuring high-level shotmaking and marathon rallies.

“Some of those points I wish I had my video recorder going. Both sides played great tennis,” Gerber said. “[Dobrik and Lunkov] do not give up. They kept battling.”

Another break at 6-5 won the match and clinched a berth into this week’s state tournament, beginning Thursday at Hersey. Dobrik and Lunkov finished the sectional in third place, winning three of four matches. As a team, Vernon Hills placed fourth behind Barrington, Libertyville and champion Stevenson.

While this is Lunkov’s first time competing at state, Dobrik has made it for the second consecutive year. In 2013, he qualified with Ismail Kadyrov, a senior that spring. The duo won two matches before losing to eventual state champions Eddie Grabill and Harold Martin of Hinsdale Central.

Dobrik said he and Lunkov, who were partners in 2013 before Lunkov broke a finger on his right hand late in the season, have formed a very comfortable — and productive — on-court partnership.

“Ishmael is this scary dude who gets every ball in. When I miss he’s like, ‘Come on Dobrik, wake up!’” Dobrik said. “With Nikita, we play off each other. We have a really good balance.”

Lunkov said Dobrik’s distinction of playing in the state tournament with two different partners is a testament to his easygoing personality and strong net game.

“He’s the best volleyer I’ve seen,” said Lunkov, a junior. “To go twice [to the state tournament] shows he’s a great player. He’s a senior, so I wish it could be more.”

Senior Kevin Han was the only other Cougars player to win a match at the sectional. He was eliminated in the third round by eventual champion Ben VanDixhorn of Libertyville.