Thanks in large part to its head coach, Oswego basketball has been raised to another level over the years with an average of 21 wins over the past six seasons. Now there is a large void as Kevin Schnable has resigned to take an administrative job. 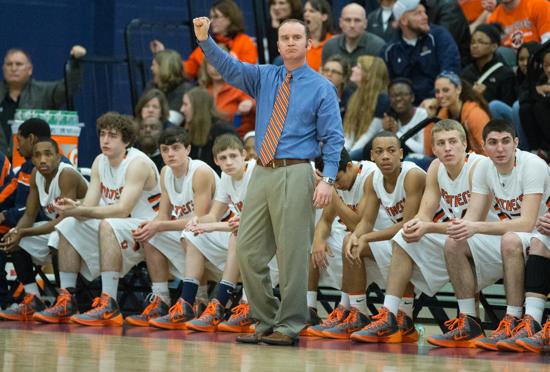 In the 60 years prior to Kevin Schnable taking over as coach at Oswego, the basketball program had a grand total of two regional titles, one sectional championship and two 20-win seasons.

In the last six years alone under Schnable, the program he once played in has averaged 21 wins a season and enjoyed plenty of postseason success.

The 2009 team finished second in the state in Class 3A and won a sectional championship, followed by another sectional title run in 2010. The 2012-2013 team, which reached the semifinals at the Proviso West Holiday Tournament, set a school record with 28 wins and won a regional championship.

Now Oswego will try to replace the coach who helped put Oswego basketball on the map.

Schnable, who won 236 games in his 15 years running the program, has stepped down as head coach. Pending school board approval June 16, Schnable will be named the McCarty Elementary School principal in Indian Prairie School District 204.

“I don’t think there is ever a perfect time for any coach to go out,” says Schnable, who spoke with his team about his departure Thursday afternoon. “Some go out when they’re on top, some go out when the talent level is low. But for me it just came down to how I feel. I’m ready for a change and challenge. This is a competitive need for me, just in a different way.”

What Schnable has meant to the Oswego basketball program, however, has been more than win totals, plaques and the magical trip to Peoria five years ago. Schnable instilled a particular culture, style and energy in the program, something every coach hopes to do when taking over as coach but finds so challenging.

Schnable took over the program at the young age of 25. Though he admits it took longer than he hoped to elevate the status of the program, the job not many people could have imagined getting done was accomplished.

Though there were a few talented pieces that came through the pipeline, Schnable ultimately changed the perception and profile of Oswego basketball. He upgraded the schedule, raised the level of offseason commitment and, most importantly, he fueled the competitiveness of the basketball being played at Oswego. He also did it at what has always been considered a “football school.”

“The fact we did what we did at a football school is one thing I’m proud of,” says Schnable. “We figured out a way to work together [with the football program]. You can’t work against one another. We did a good job of balancing football and basketball for the multi-sport athlete.”

As someone who grew up in Oswego and one who played and graduated from Oswego High School, there is a strong attachment for Schnable. He embraces both what the program has accomplished and what lies ahead personally and professionally.

“I’m proud of what we did, but I’m more proud of who we did it with,” says Schnable of all the players and coaches he’s worked with. “I surrounded myself with good people –– from the coaches in the program to our players and their parents. The people at Oswego and within the basketball program are the two real pros that stand out when looking at all the pros and cons in this decision. But family is first. This was a family-based decision, and I’m excited about the opportunity I have ahead of me.”

ICYMI: There have been 20 No. 1 ranked prospects in Illinois since the Class of 2000. Here's a ranking of 1 through… https://t.co/ECILNBaVgN

When I was young and the Hoops Report was just beginning in the mid-1990s, Sonny Cox was one of the first coaches w… https://t.co/tTab5NOtNK

Sadly, the legendary Landon “Sonny” Cox, who compiled a 503-89 record while coaching at King, passed away today. Co… https://t.co/F4jnWcFc1k